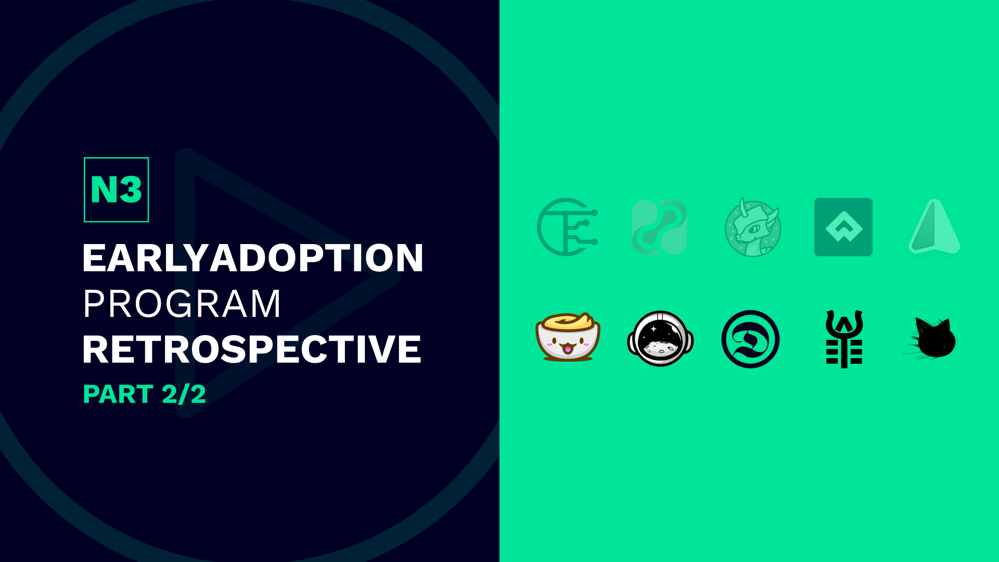 Neo Global Development (NGD) marked a successful wrap to the Neo N3 Early Adoption program at the end of 2021. During its tenure, this program accepted and fostered 10 successful new projects within the Neo N3 ecosystem. This article is the second part of a two-part retrospective of the projects in this program: What they are, what they have accomplished, and what’s next.

About the N3 Early Adoption program

NGD rolled out the Neo N3 Early Adoption program in 2021 in conjunction with the Neo N3 blockchain. The program allocated US $10 million in grants to jumpstart the success of high-potential projects on the new blockchain.

Projects accepted into the program received grants, technical support, and other incubation opportunities structured to promote the success of each project and establish a strong foundation to bring value to the projects and holders engaged with the Neo N3 ecosystem.

Project achievements and next steps

Defina Finance is a blockchain-based role-playing game (RPG) featuring a play-to-earn system. Players can participate in DeFi yield farming and reap on-chain earnings while enjoying a strategic game with Player Versus Environment (PVE) and Player Versus Player (PVP) modes. Defina also has its own utility and governance token ($FINA) that is used in the Defina ecosystem and beyond. Together, Defina’s game and tokens are intended to serve as a gateway for traditional gamers to familiarize themselves with DeFi and decentralized organizations (DAOs).

While participating in the Early Adoption program, Defina Finance has boosted rewards for the beta period for early players who tested out the game and provided suggestions. Now, the project is entering the mass adoption phase, where token rewards will be distributed more equally to ensure sustainable growth for Defina.

Through its partnership with Neo, Defina aims to build a great GameFi ecosystem. Ultimately, Defina’s vision is to bring blockchain to millions of gamers, allowing them to explore a new form of gaming through blockchain technology. As an early-stage GameFi project, Defina values both the financial and other incubation support of NGD and the broader support of the Neo community. The Defina team views this combination as ideal to help the young project achieve its ambitious goals.

Humswap earned an Excellence Award in the 2021 Neo Frontier Launchpad hackathon. Humswap brings together the worlds of DeFi and NFTs by creating unique NFTs that have potential benefits such as stackable yields, yield multipliers, lower swapping fees, and more.

As a project supported by the Early Adoption program, Humswap has released two NFT collections: First the Humswap Bowls collection, and most recently the ANTs collection (based on a snapshot of owners of Humswap Bowls and Neoverse N, E, and O series holders).

The Humswap team’s current focus areas include enhancing user experience for the Humswap website; working with outside collaborators for technical assistance; marketing Humswap to grow the user community; and highlighting the comprehensive capabilities of the Neo N3 blockchain to support NFT projects. The team is also working to prepare additional snapshots for Humswap Bowl owners, including a snapshot for Lucky Tigers, the next collection for Humswap Bowl owners.

Humswap continues to improve its product and grow the project team as they work to bring DeFi features to the Neo community and foster additional growth for Neo’s overall user base.

Mario Lopez and Jason Tezanos, co-founders of Humswap, expressed their thanks for the support of the Early Adoption program. “We would not be where we are without this support,” said Lopez. “We cannot wait to share the great things we’re cooking with you and the rest of the community!”

NekoHit was another Excellence Award winner in the 2021 Neo Frontier Launchpad hackathon. The NekoHit project focuses on eliminating trust problems between content creators and their sponsors. NekoHit accomplishes this by using blockchain technology to give more control to both parties.

NekoHit is working to deliver a basic but stable crowdfunding platform that will be 100% on-chain. With support from the Neo Early Adoption program, NekoHit has developed and deployed smart contracts to the Neo N3 MainNet smart contracts for NekoHit’s core contract and a token. Now the team is constructing a community DAO token.

The team next plans to:

“When our project started at the Neo Frontier Launchpad Hackathon, we were just a proof-of-concept,” said Yannick, co-founder of NekoHit. “The Early Adoption program has helped us move to the next level. We couldn’t have made it this far without Neo’s support.”

With the support of the Early Adoption program, the Saffron team has been working to enable DeFi growth in the Neo ecosystem. Saffron has created a staking contract for NEO and SFI that enables SFI, NEO, and GAS staking. The contract now is live on the Neo N3 TestNet. It has been tested by over 100 users and will undergo an audit before launching on the Neo N3 MainNet.

Once the staking contract audit is complete, Saffron plans to:

TOTHEMOON UNIVERSE is a Metaverse set on the Moon. TOTHEMOON plays host to a strategic, community-building game powered by NFTs. Players will engage in a new-age society built by Moon Plot Owners and Moon Teams, each with its own governance system. TOTHEMOON was the first NFT project in the Early Adoption program to sell out an NFT collection.

The project co-founders expressed appreciation for Neo’s assistance through grants and contract audits via the Early Adoption program. Now that the project is successfully launched on Neo N3, the team is focused on game development to build out the universe to include several galaxies on different chains.

Fostering the Neo N3 ecosystem in 2022

The N3 Early Adoption program for 2021 has concluded, but NGD’s dedication to drive growth and success for the Neo ecosystem continues. In 2022, the Eco Support organization has shifted focus to fostering Neo ecosystem growth through the EcoBoost program. Watch for further updates throughout the year.