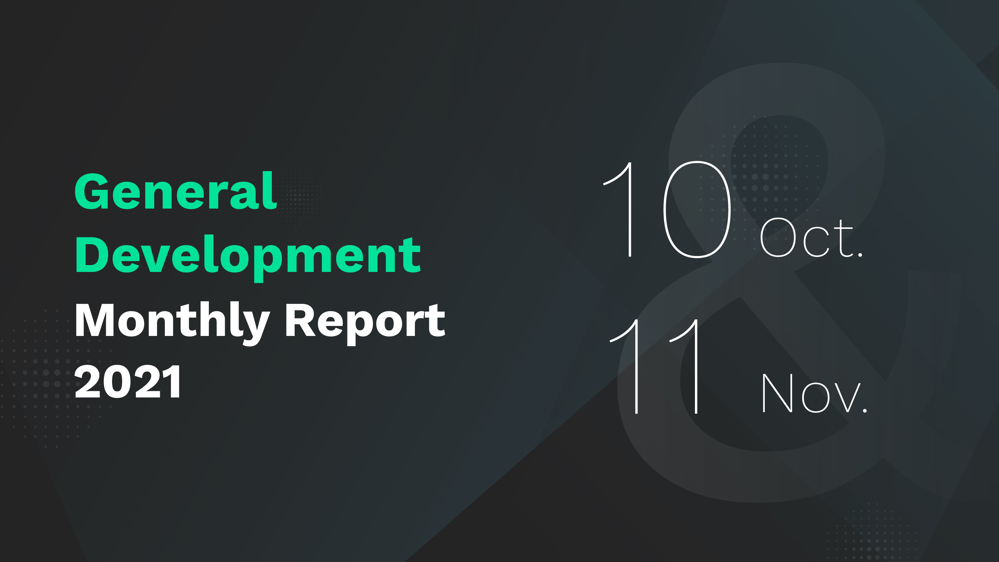 October and November continued to be an exciting time for Neo. From multiplying development and releases and added support for NEO on major crypto exchanges, to significant milestones achieved and fast-growing partnerships across the Neo ecosystem and beyond, these months set the standard for a new pace of expansion and opportunity built on the foundation of Neo N3.

As a reminder for regular readers of the Neo Global Monthly Report, we recently updated these reports to make them easier to consume. Our new format provides one report focused on general progress and the other focused on development-specific progress. This month’s report provides you with highlights from the most recent general ecosystem progress during October and November of 2021. Key topics this month include:

The final phase of the Token Migration Incentive Program concluded

The final phase of the Token Migration Incentive Program began on October 1st. During this time, bonus NEO incentives for migration decreased from 0.75% to 0.5%. Migration bonus rewards concluded on October 31st.

The Neo Legacy network will continue to operate at least through the end of July of 2022 (a year after Neo N3’s launch), but token holders who have not yet migrated their assets to N3 should do so. This will be necessary so holders can get the most out of the Neo ecosystem, use the latest Neo dApps, participate in governance, and receive increased GAS rewards by voting for Neo Council members to manage and decentralize the Neo network.

Payment options also are expanding: In November, Neo and crypto-fiat hybrid payment solutions provider Alchemy Pay unveiled a new partnership that will enable global payment acceptance of NEO tokens. Integration into Alchemy Pay’s payment systems will allow NEO tokens to be transacted across Alchemy Pay’s merchant networks, including major eCommerce platforms such as Shopify and Arcadier. As part of the collaboration, Neo and Alchemy Pay also became two of the founding members of the new Blockchain Infrastructure Alliance (BIA), a group composed of blockchain industry leaders, service providers, and regulators with a mission to drive the growth of blockchain and cryptocurrency.

In November, in its second on-chain action, the Neo Council voted to cut the N3 oracle request fee from 0.5 to 0.1 GAS. The Council took this action with the intent to make oracle functionality (one of several new features natively supported in the Neo N3 platform) more cost-effective for developers making regular requests.

The Neo community also gained a new way to vote and earn GAS rewards on Neo N3 as of October: NeoBurger, a Neo N3 governance dApp, debuted its automated voting tool and NEO token wrapper. The NeoBurger project seeks to address the usability issues of indivisible NEO in applications such as DeFi and to help holders maximize their GAS rewards.

COZ enabled voting on Neon Wallet

In October, COZ released a preview version of Neon Wallet v2.10.0, with WalletConnect support and a compatible N3 voting frontend, allowing users to participate in governance before the formal release. Following this, COZ formally released Neon Wallet v2.10.0, the first formal release to include WalletConnect support and governance voting capability, as well as support for NFT assets following the NEP-11 standard. COZ also published the first formal version of Neon Wallet mobile for Android and iOS devices.

John Wang, head of Neo Eco Growth, was the featured guest at AMAs hosted by CryptoMUTANT, Cryptostalkers, and BigONE Exchange.

In October, Neo leaders and the Flamingo Finance team joined the Epicenter: Web 3.0 and Cryptocurrency conference where Neo and Alchemy Pay were title sponsors in Lisbon, Portugal. The leadership teams discussed topics such as Web 3.0, the Metaverse, Neo N3’s journey to build the smart economy, and the adoption of crypto in Europe and Asia. Videos of event sessions and an event recap are available.

In November, Neo announced a partnership with the Metaverse Alliance, in which, initially, Neo will serve as one of the sponsors for the online Metaverse Hackathon (Metathon) that is live now and runs through late January 2022. Look for more hackathon-related announcements from NGD in the coming weeks.

As part of Neo’s drive to foster the success of developers building dApps on Neo N3, NGD introduced DevLog, a series of live events on the Neo Discord channel to connect the broader blockchain community with subject matter experts in the Neo ecosystem. Inaugural episodes in November featured explorations of the new NeoTrace tool with Harry Pierson(NGD Enterprise chief architect) and NeoFS and Oracle with Alexey Vanin from Neo SPCC.

In another significant milestone, the Neo MainNet turned five years old on October 17th. NGD celebrated Neo’s journey with a retrospective video and a message from Neo founder Da Hongfei.

Adding to the celebration, Neo News Today released a podcast featuring thoughts from prominent Neo community members on Neo’s achievements and future. NNT also commemorated the anniversary with the launch of an immediately popular r/NEO GasBot on the Neo N3 MainNet. The new GasBot allows users to send and receive GAS tips on the Neo subreddit.

NGD leadership unveiled a growing cadence of new partnerships during October and November, and projects across the ecosystem amassed a range of new accomplishments and milestones.

NGD welcomed six additional promising projects into the N3 Early Adoption Program. This $10 million USD initiative is designed to foster the development of new dApps on the Neo N3 blockchain. The program is part of Neo’s broader $200 million investments dedicated to supporting Neo ecosystem projects ranging from those of grassroots developers to those of established businesses and institutions.

In November, Neo announced a strategic partnership with vEmpire, a Metaverse investment project, to enable greater and more decentralized community investment and governance for Neo’s GameFi- and Metaverse-based projects.

Developers across the Neo ecosystem lost no time in expanding their projects on the foundation of the new Neo N3 blockchain. Their progress has been rapid, and their accomplishments continue to rack up. While not every new initiative, release, and achievement can be included here, some highlights included:

Detailed updates about recent development progress on Neo N3 by the core developers and developer communities are available in the most recent monthly report. We also have rounded up a high-level look at development news from October and November here.

In October, NGD released Neo-CLI 3.03, which fixed a variety of bugs and optimized the user experience. Following a period of stable operations on the N3 TestNet, the latest version was upgraded on the N3 MainNet.

What’s next in the Neo Global Monthly Report

Looking ahead to next month, watch for another general report as well as a development-focused report with detailed updates on development progress made during November and December.