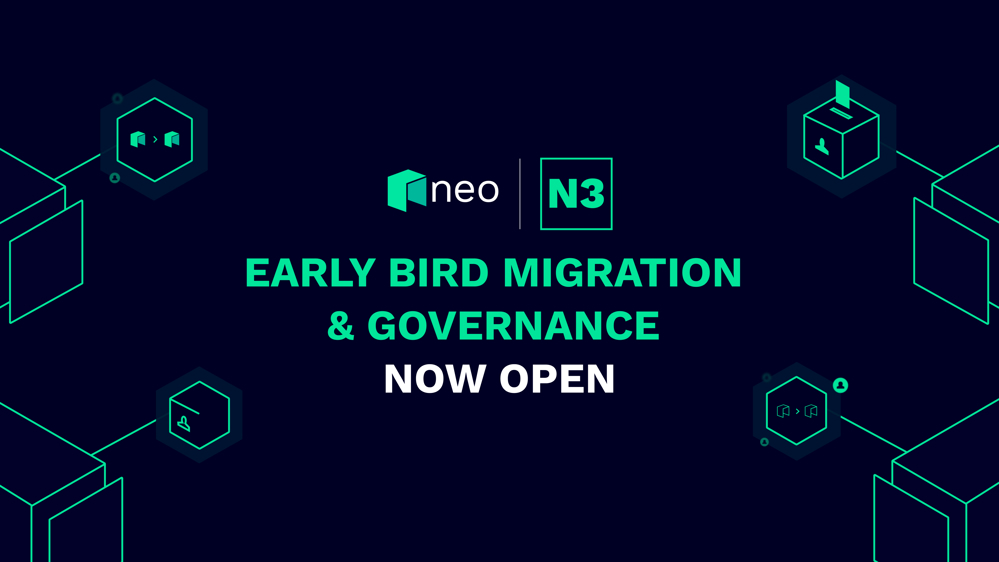 As of today, users are able to start migrating their NEO and GAS tokens from Neo Legacy to Neo N3. NEO token holders are also able to start participating in governance to earn GAS rewards, starting from 9:00 on August 9th, 2021 (UTC).

This initial wave of migration is the “Early Bird” phase, which comes with a very specific set of advantages and disadvantages. Token holders who wish to participate in the Early Bird migration should read the below carefully to ensure that they understand the considerations.

1. The main benefit of early bird migration is that you can start voting

Under the rules of Neo’s new economic structure, the 80% of newly minted GAS is distributed to NEO token holders who have successfully voted for a Neo Council member. As fewer NEO tokens will be used to vote during the Early Bird phase, the GAS will be split among less NEO and may yield a larger than usual GAS generation rate.

2. Not all wallets will support the migration or voting immediately

It will still take a little bit of time to achieve universal support for migration and voting across all of the most popular Neo wallets. Support is available now on NeoLine Chrome and O3 Desktop.

3. Exchanges do not yet support trading of NEO or GAS tokens on Neo N3

Similar to the above, it will take a little bit of time before we have wide exchange support for Neo N3. If you migrate your tokens away from Neo Legacy, you cannot migrate them back. This means you will not be able to trade or sell your tokens until Neo N3 exchange support is available.

4. You will not be eligible for additional migration bonuses

The Mass Migration phase is scheduled to begin on September 1st, when wider ecosystem support will be available. A Token Migration Incentive campaign will run in tandem, offering up to a 1% bonus on the amount NEO tokens migrated. If you choose to participate in Early Bird migration, you will not be eligible to receive this bonus.

If you have understood the above and would like to participate in Early Bird migration, you can head over to neo.org/migration to find more information on your migration options, along with user guides.

Neo Global Development has developed a web portal for migration, which you can connect to via NeoLine Chrome and O3 Desktop. Other wallets are planned to have in-app migration in the near future.

In regards to NEP-5 tokens, the migration from Neo Legacy will require the contract owner to first create a new NEP-17 contract on Neo N3. Token holders should seek information from project owners on migration plans and timelines. It is not anticipated that NEP-5 projects are likely to participate in migration during the Early Bird phase.

One further item of note: We had previously communicated that all migration transfers of less than 10 NEO or 20 GAS would incur a 1 GAS fee. The fee will be charged to the user in Neo Legacy GAS to pay for the transaction on the N3 side. We would like to advise that it is highly likely that the fee will be calculated at less than 1 GAS when performing the transaction and you will be charged accordingly.

As of today, NEO holders who migrate their tokens to Neo N3 can start participating in governance.

On Neo N3, NEO holders have the right to elect a 21 member Neo Council to manage the Neo Blockchain. The Neo Council will consist of council members and consensus nodes who provide services, maintain the network, and adjust critical blockchain params.

NEO holders are rewarded with GAS tokens for successfully voting for a council member. Anyone is free to register as a council candidate. This is an important step towards Neo’s goal of decentralization.

The Neo Foundation has selected the initial Neo Council, comprising seven NF nodes, four Neo Global Development nodes, and 10 community run nodes. The NF has used its own NEO to vote in initial council members to ensure smooth transition to the N3 version of the Neo blockchain.

As a NEO holder, you have the power to elect anyone you like to the Neo Council. However, it is important that you vote for candidates that you feel will best represent your values when making governance decisions.

Neo Global Development has developed a governance portal that allows you to cast your vote by connecting your NeoLine Chrome or O3 Desktop wallet. Other wallets will support the portal in the near future.