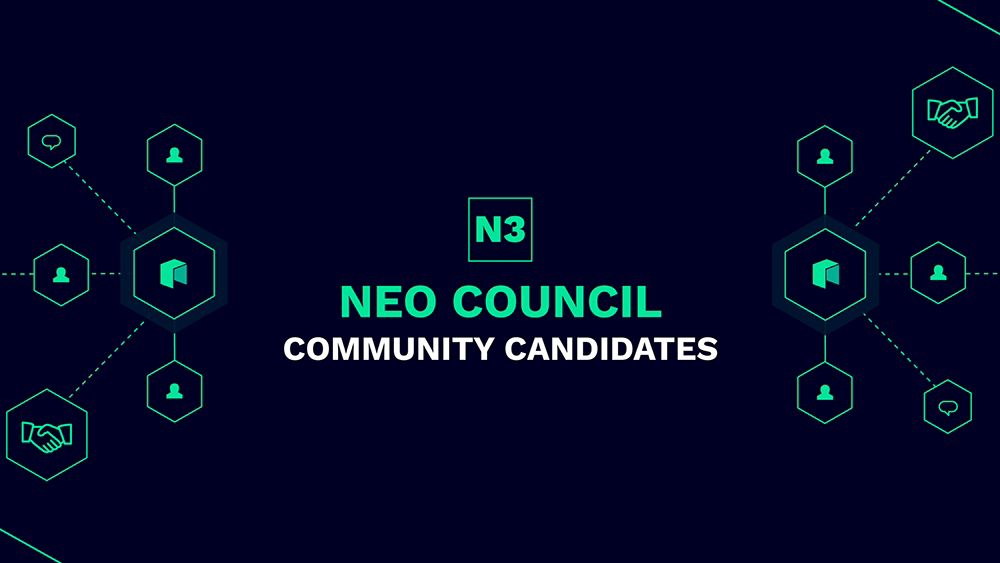 As a NEO token holder, your voice counts.

With the launch of N3, the Neo community has the power to elect a 21 member council to manage the Neo blockchain. The Neo Council will consist of council members and consensus nodes who provide services, maintain the network, and adjust critical blockchain params. NEO holders are rewarded with GAS tokens for successfully voting for a council member.

Every NEO token is worth one vote, and it is important that you use your votes to elect candidates that you feel will best represent your values when making governance decisions. It is also important that you elect council members who have a solid understanding of the Neo blockchain and are capable of carrying out the responsibility of operating a council node.

To ensure a smooth transition from Neo Legacy to Neo N3, the Neo Foundation has used its own NEO to vote in an initial Neo Council, comprising seven NF nodes, four Neo Global Development nodes, and 10 community run nodes.

But from here it is all up to you. You may vote in or vote out anyone you like. Anyone is free to register as a council candidate. This is an important step towards Neo’s goal of decentralization.

To help you become familiar with your current candidates, each of the 10 community groups elected into the initial council have provided a general introduction below (listed in alphabetical order). Within these statements, you will learn about their relevant experience, commitments to the Neo ecosystem, and pledges to you as a voter.

We are sure you will find a representative that is right for you.

For more information on how governance works on Neo, visit neo.org/gov.

AxLabs joined the Neo community in 2018 with a strong focus on enhancing the Developer Experience - not only by building tools, but also by being vocal about it.

Together with the most famous and coolest developer cat in the Neo ecosystem, a.k.a. the neow3j bongo cat, our team maintains the neow3j project. The neow3j SDK and compiler enables a wide number of Java developers to write applications and smart contracts in their native programming language, powering dApps to crypto exchanges. In addition, we built Neo Playground (a browser-based IDE for playing with Neo) and other tools to alleviate recurring pains for developers.

Our core values are transparency, decentralization, and the empowerment of individual contributors (builders). Therefore, we are excited to materialize these values towards the common good by building DAOs, supporting open protocols (e.g., in DeFi), and providing tools to empower others intending to build on Neo.

AxLabs is committed to listen to NEO holders as well as to stakeholders and broadly discuss how the network should evolve over time. The power of Neo is the power of the community, together.

ChainNode (formerly 8BTC Forum) was founded in 2013 and is currently the largest community for blockchain fans in China. It is also the official discussion forum for a large number of high-quality projects and platforms. Everyone can start hot topics such as Bitcoin scaling and Ethereum hard fork in the community. It was recommended by Bitcoin.org as the preferred Bitcoin community in China.

On this basis, ChainNode also provides users and partners with comprehensive community services, including online and offline events, AMAs, live-streamings, and other special modules. It has also launched industry-renowned event sub-brands represented by "ChainNode livestream" and "Chainge"(which is a tech focused meetup brand).

COZ has been a pillar of stability for the Neo community since before the original rebrand from Antshares. As a team we provide support in nearly every facet of ecosystem operation. Our tools range from retail customer products like Neon and Dora to developer tools like the Dora API, Boa, Mamba, and Neon.js.

We also provide a number of services ranging from ecosystem security and developer support, to product design and platform architecture. If you have interfaced with the Neo blockchain, there is almost a guarantee that you have used one of our solutions. As a committee member, our team will continue our role of ensuring the stability, security, and overall health of the ecosystem with the community as our first priority, always.

Everstake is a team of experienced developers, financial experts and blockchain enthusiasts.

Everstake became the latest Consensus Node on the Neo N3 Preview1 TestNet in early 2020. After that, we worked on NEO IDE, which allows users to create contracts for the Neo blockchain in the browser, without setting up an environment and downloading developer packages.

We are happy to be a part of the Neo Council and ready to support Neo with all the required technical and human resources, so that the network can grow faster and benefit hundreds of thousands of Neo users.

By supporting such attempts to drive progress, we can see a better future sooner. The Neo platform represents a completely new type of digital economy, which can be used in many ways, benefiting not only itself but also the traditional markets.

InfStones is the world's leading blockchain infrastructure provider. Currently, InfStones provides services to hundreds of institutional clients around the globe, supporting tens of thousands of nodes on more than 50 major blockchains.

We are delighted to join the Neo ecosystem with the implementation of Neo N3 so that we can use our expertise in this important stage of upgrading and innovation. Through this partnership, InfStones aims to become an important infrastructure component in the Neo ecosystem and help Neo N3 achieve its mission of empowering the world with blockchain technology.

InfStones is working on the Neo N3 API platform, in other words, we are building "Infura" on Neo. InfStones will provide all projects, developers, and users in the Neo ecosystem with its full suite of services, including public API services, full / archive node access and data services. These features will become an essential part of the infrastructure in the Neo N3 ecosystem.

Nash was founded as NEX in 2017 by five members of COZ, who were influential in developing core software for the Neo blockchain such as the Neon wallet, Neoscan browser, and neo-python. The company raised funds in the first regulated security token offering, issuing the NEX token on the Neo blockchain. Committed to non-custodial solutions and nurturing the crypto ecosystem through blockchain compatibility, Nash created a cross-chain Layer-2 exchange, bridging Neo with Ethereum and Bitcoin and offering the performance of a centralized exchange while never taking control of user funds.

Nash has since pivoted to focus on DeFi accessibility for the consumer sector, while maintaining the Layer-2 exchange as a professional solution. Nash will offer fully functional cash accounts with IBANs directly integrated with a crypto/fiat gateway and DEX markets, as well as a flagship earnings product.

As Neo moves to N3, Nash will continue to support Neo within our app and hopes to integrate even more aspects of the Neo ecosystem, opening it up to a new wave of users thanks to our easy-to-use fiat gateway. N3 is set to make Neo unique within the industry and highly attractive to blockchain developers, and Nash looks forward to being part of the Neo journey ahead!

Firstly, we’re so honored to have been chosen by the NF as one of the initial Neo Council members. We feel it is important that the Neo Council has members who will represent everyone in the ecosystem, and we believe that is what we bring to the table.

As a group, we have been covering the Neo ecosystem since 2017, providing a platform for developers and dApps to keep the Neo community informed. We have worked with NGD on events. We have helped community developer groups with promotion. We have brought news, content, and interviews to the everyday token holder.

This position has provided us with a unique feel for the needs of both regular Neo users and those who wish to build their next business here.

We intend to bring this perspective to our role on the Neo Council. Our philosophy is simple: We all succeed if Neo succeeds. NNT will always lean towards making decisions that will benefit the common good. To this end, NNT will be putting rewards from our Neo Council position directly back into the Neo ecosystem to fund developer grants, awareness efforts, community events, and more.

Neo Saint Petersburg Competence Center (Neo SPCC) is a research and development group created to work on complex problems in the area of decentralized computer systems and data storage. We work on Neo core and corresponding ecosystem projects as a part of the international community of developers. Currently, our main projects are NeoFS, a highly reliable decentralized object storage system integrated with Neo blockchain, and NeoGo, a high-performance Neo node implementation and SDK for Go programming language. Our long-term goal is to build a truly decentralized cloud platform based on Neo technologies that will allow solving almost any real-world B2B or B2C problem in the decentralized setting.

We have obtained solid expertise in the Neo protocol, solving all the arising issues promptly and efficiently since July 2018. Neo N3 has three important components which our group has been contributing to, including NeoFS, NeoGo, and Oracles. Our active participation in creating numerous technical proposals for Neo core and the ecosystem is proof that we are willing to work jointly with other Neo community members and for common success. In addition, Neo SPCC has been hosting a Neo Consensus node on the Legacy TestNet for 3 years.

As one of the Neo developer communities in China, NEXT has always been committed to building infrastructure for the Neo open network and providing friendly tools for Neo eco-developers and users. Since our inception in 2017, we have developed NeoLine - a secure, convenient and professional Neo wallet that includes both a mobile and Google Chrome plugin version, and NeoTube - the blockchain explorer.

As a member of the Neo Council, NeoLine plays a significant role on the Neo N3 network. The mobile and plugin wallet not only perfectly fits the Neo N3 network, but also provides a channel for users to migrate Neo Legacy assets to Neo N3. The plugin wallet also supports Neo’s convenient dAPI for developers and applications to use. Meanwhile, the Neo N3 NeoTube block explorer provides accurate data, with more data and features to be added in the future.

Switcheo Labs is a leading blockchain development firm that has received equity investment from Neo Global Development. Switcheo Labs has been a strong supporter of the Neo ecosystem from the beginning, developing the world's first DEX on Neo Legacy in 2018. Switcheo also operates Neo Legacy seed nodes for public use, and will continue to do so for Neo N3. Switcheo Labs has since built a decentralized spot and derivative exchange, Demex, that is connected to the Neo ecosystem through the PolyNetwork relay chain that is developed by NGD. Demex currently trades multiple NEP-5 tokens, including Switcheo TradeHub's native protocol token - $SWTH. $SWTH is also tradeable on the Neo DEX, Flamingo, as an NEP-5 token.

As a Neo Council member, Switcheo Labs will lean on its vast experience in working with Neo to build supporting platforms and tools that will bring Neo N3 to a new era. More importantly, Switcheo Labs will tap on its expertise in DeFi and other blockchains to supplement Neo N3's decentralized cross-chain functionalities, bridging the next-gen blockchain into a new interoperable world.