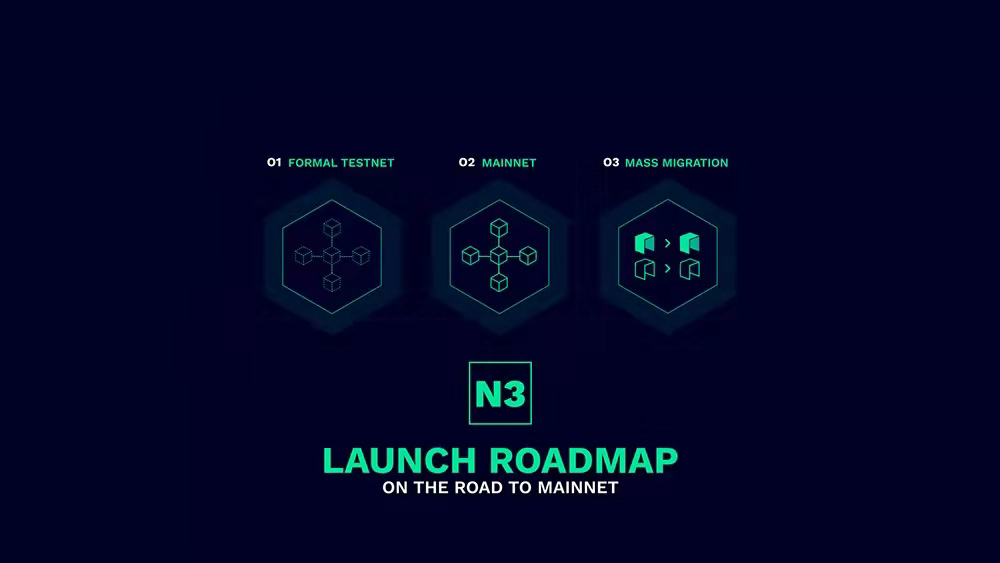 Last week we launched Neo N3 RC4, which we are hopeful will pass all our stability tests and graduate to become the Neo N3 Formal TestNet. Once we have achieved this milestone, we will begin rolling out the Neo N3 MainNet, along with migration and governance.

While we are not yet ready to finalize dates, we can outline how we intend to move from Neo Legacy to Neo N3. We can also reveal some of the migration options that will be available at a high level.

Essentially, the rollout will occur in three phases: TestNet, MainNet Setup, and Mass Migration. Various tasks will be completed during each phase to ensure that the Neo N3 MainNet is ready to support healthy network operations by the time the public migrates tokens en-masse.

Token holders will have two migration options to choose from, depending on their preferences.

The first option will be “Early Bird” migration, which will closely follow the minting of the Neo N3 genesis block. This will provide token holders with an opportunity to be among the first to participate in voting, potentially offering opportunities for a larger than usual GAS yield for a short period of time.

The second option will follow the start of the Mass Migration phase, and will offer token holders direct bonuses based on the amount of NEO tokens they migrate.

Each option has its own benefits which are expanded on further in this article. Additional information will also be provided as we move closer to kicking off migration.

The phases will be carried out as below: 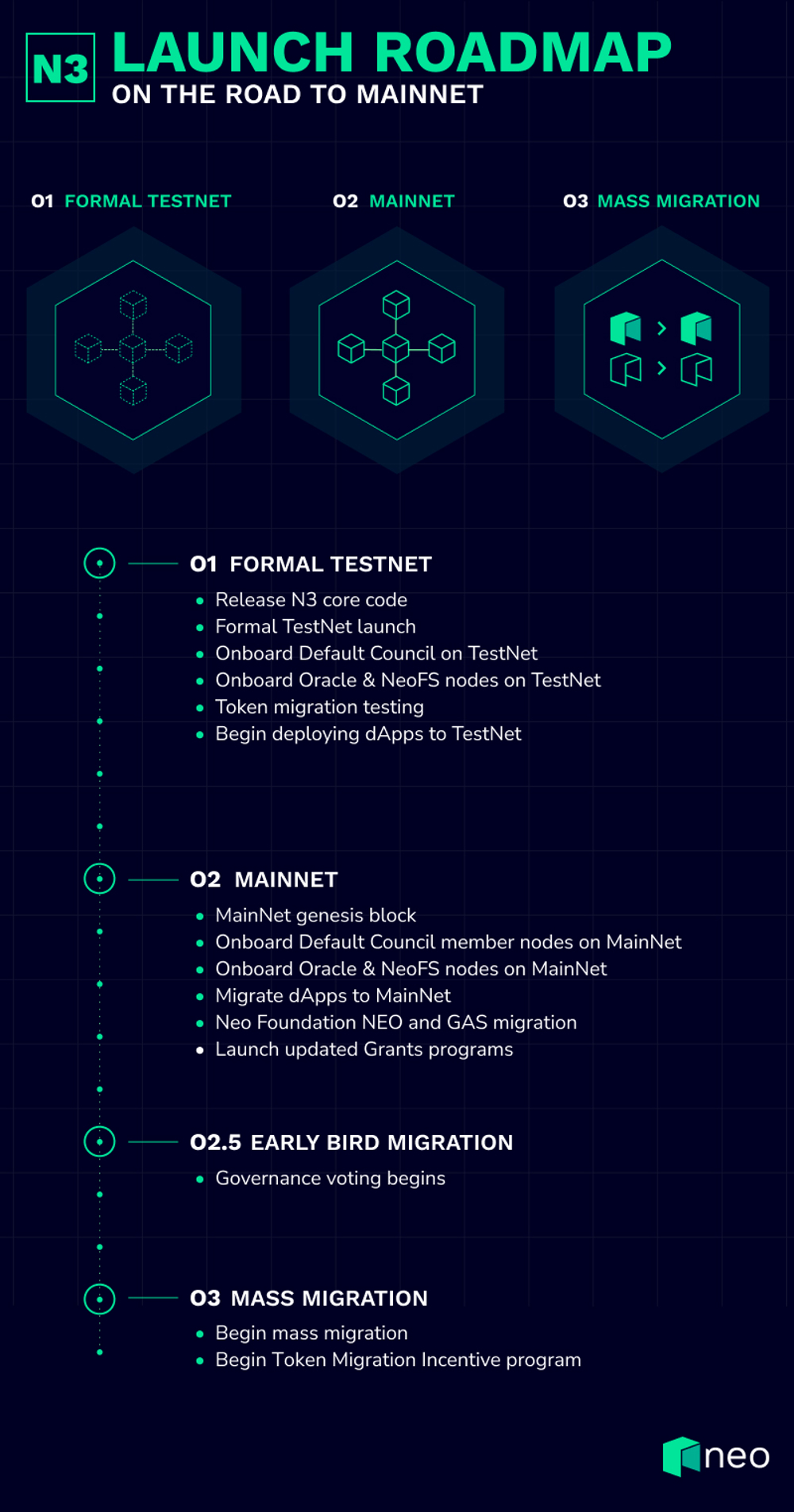 The deployment of the Neo N3 RC4 TestNet was the first step on the final road to Neo N3 MainNet. We have already begun onboarding critical components of the network, such as Initial Council members, NeoFS nodes, and Oracle nodes.

Once we have verified that the network is running with stability, the RC4 codebase will be re-published as Neo v3.0.0 and we will move onto the MainNet launch.

The initial NeoFS and Oracle networks will be operated by Neo SPCC and Neo Foundation, respectively. These are being set up to ensure smooth functionality for the first round of dApps deployed to the Neo N3 network.

The first wave of N3 dApps will begin deploying contracts to the TestNet. Some of these dApps will be participants of the Neo Frontier Launchpad, while others will be projects supported by NGD’s Early Adoption Program.

Early token migration and voting will open during this phase. However, migration options and access to external services, such as exchanges, will be limited.

The focus during the MainNet Setup period will be exactly that - setting up the MainNet. Neo will be laying the foundations to ensure the Neo N3 network can stand up on its own and is ready for mass migration.

The initial Neo Council, NeoFS nodes, and Oracle nodes will be migrated to MainNet following a period of smooth operation on the TestNet.

The Neo Foundation will migrate its NEO and GAS token supply from Neo Legacy to the Neo N3 MainNet. The Neo Foundation intends to use an allocation of its NEO tokens to vote in the Neo Council, while GAS will be used to support the onboarding of dApps, governance candidates, nodes, and other early setup initiatives.

There will be advantages and disadvantages to participating in Early Bird migration.

NEO and GAS can be migrated from Legacy to N3 tokens at a 1:1 ratio. NEO holders who migrate early will have the opportunity to be the first to vote in Neo’s new governance system.

Under the rules of Neo’s new economic structure, the majority of newly minted GAS is distributed to NEO token holders who have successfully voted for a Neo Council member. As fewer NEO tokens will be used to vote during the Early Bird phase, the GAS will be split among less NEO and may yield a larger than usual GAS generation rate.

However, during this time, there is likely to be very limited N3 support from external service providers such as wallets and exchanges. This may mean that you could find yourself unable to trade your N3 NEO and GAS tokens or store them in your preferred wallet.

Additional migration channels and incentives will be made available in the next phase.

More information on migration will be available in the coming weeks.

dApps that intend to be ready for use from day one of mass migration will begin migrating to the Neo N3 MainNet.

Upon conclusion of the MainNet setup phase, we will begin the mass migration of NEO and GAS tokens. We estimate that this phase will begin roughly one month after Neo N3 has minted its genesis block.

By this point, all the pieces should be in place for stable MainNet operation, the first wave of dApps should be ready to start accepting users, and most of the ecosystem infrastructure such as explorers and wallets should be equipped to support the migration.

A token migration incentive program will be launched to encourage token swaps from Neo Legacy to Neo N3. Various migration channels will be available, including Neo’s official website, alongside selected wallets and exchanges.

We should note that although we are working hard alongside major exchanges to ensure speedy support for the Neo N3 MainNet, we do not have control over the internal timelines of external organizations. We will make every endeavor to ensure wide and speedy adoption of N3, but ultimately, universal support may come gradually.

An incentive program will begin starting the first week of Mass Migration, offering the following bonuses for NEO migration:

As NEO is indivisible, incentives of less than 1 NEO will not be issued. Centralized exchanges that facilitate migration may choose to offer fractional NEO rewards at their own discretion. All the token incentives will be issued to the appropriate accounts within 1-3 days after users complete the migration. There is no plan for GAS migration incentives at this moment.

More information on migration will be available in the coming weeks.

The Neo Legacy blockchain will move into long-term support following the launch of Neo N3. However, having two blockchains that continually generate GAS at slightly different rates makes things complicated for providers, such as exchanges who need to calculate circulating supply.

To solve this issue, Neo Legacy NEO tokens will cease to generate GAS tokens at a yet-to-be-specified block height. The final GAS generation block will be selected after Neo N3 migration has been open for a period of time. The block height and estimated date will be communicated with plenty of advance notice to ensure all NEO token holders have ample warning and time to complete migration.

A final note: While it is true that all our hard work is about to bear fruit, our journey is really just beginning.

We have already seen some stellar dApp development using N3 during the Neo Frontier Launchpad. In just a short period of time, developers brand new to Neo and its tooling have been able to produce amazing results. It is a testament to the hard work that has gone into making Neo N3 a public blockchain platform that not only stands up to its competitors, but exceeds them in many respects.

As our tooling continues to mature, documentation continues to improve, and more sample code is written, so will the Neo ecosystem continue to grow. We can’t wait to see all the amazing dApps you will build on Neo, and we are grateful to have you along for the journey.