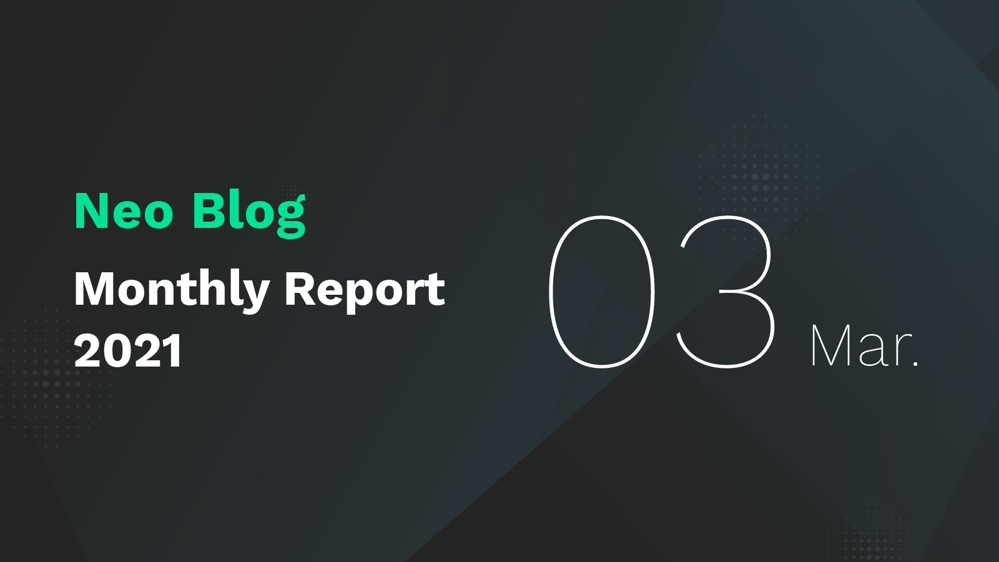 March was an eventful month for Neo, with the reveal of the N3 brand, the launch of a new neo.org website, and the release of Neo N3 RC1 TestNet.

N3 is the version brand for Neo 3.0. It allows us to market our major releases to developers, without interrupting the regular user’s relationship with Neo’s core identity. We have also started referring to 2.x (the current Neo blockchain) as Neo Legacy to clearly communicate to users that it is being superseded and will not receive further updates in the future.

Following the N3 reveal, we were overjoyed to release the Neo N3 RC1 TestNet - the first official N3 TestNet. This first release candidate version includes the integration of NeoFS into the oracle modules for the first time, alongside state root services and other new features. Neo’s global community also did a fantastic job keeping in lockstep with core protocol development, with RC1 compatibility immediately announced for almost all major projects, including the Neo Blockchain Toolkit, NeoGo, the Neo Python Suite, Neow3j, and more.

To reflect the new version brand and celebrate the TestNet release, we also launched a new website with updated information on Neo and N3. Visitors can take a tour of all the features found in N3, and learn more about ecosystem support opportunities, Neo’s mission, its global communities, and more. Further updates will be made in the near future to provide information on governance participation and token migration.

Moving forward, a checklist has been opened for Neo N3 release candidate two, as we continue along our path to the Neo N3 MainNet. A hackathon event will soon be launched to allow developers to compete for prizes and mentorship as they familiarise themselves with Neo’s new complete blockchain development platform.

March saw the release of Neo N3 RC1 and its TestNet. The new version included most of the new functionality for N3, including the name service and support for NeoFS. The update also fixed bugs with the state service and moved consensus-related settings such as MaxTransactionsPerBlock and MaxBlockSize to the DBFT Plugin. Aside from assorted other optimizations, the RC1 release also added two new opcodes to the Neo contract system, POW and SQRT.

The most notable improvements in this version can be found below:

Building on from the Preview releases, the core development team has been adding new features to the state root service. P2P functionality has been added, including the ExtensiblePayload to carry signatures. Several bugs have been fixed, including faulty logic where the state root witness could be null, a network magic number check before enabling state root console commands, a hash calculation logic fix, and others.

The team has successfully completed neofs-api-csharp and integrated it into the N3 oracle module, allowing C# nodes to easily interact with NeoFS. The master nodes used in the NeoFS RC1 test network are operated by Neo SPCC using NeoGo.

The additions of the POW and SQRT opcodes are used to calculate the power and square root of a value respectively. Useful for many contracts, such as automated market makers, the new opcodes are intended to simplify the development of contracts that depend on these functions. Necessary logic changes to implement them across the Neo core, virtual machine, and .NET devpack have all been completed.

At this time, the team is preparing a task collection checklist for N3 RC2. The checklist will be frozen in mid April with the intention to release by the end of the month. Subsequently, the RC2 TestNet will be set up at the beginning of May. This is hoped to be the last RC version before the N3 MainNet release, which is planned for release around June.

Implemented the redesigned asset flow as proposed in FIP#2 and enabled migration for related Flamingo assets held by existing users.

Rolled out Preview5 support for NEO•ONE node and began working on N3-compatible updates across its node, compiler, and other tools.

Released neow3j v3.8.0 to bring its Java SDK, compiler, and devpack up to date with N3 RC1 alongside other optimizations.

Launched an RC1-compatible version of the NeoLine mobile and Chrome extension wallets, and optimized a new NeoTube release for the TestNet.

Developed new fuzzing tools for critical N3 component testing and continued progressing on its security audit for the RC1 node.

Following the approval of community members, the Flamingo team implemented the redesigned asset flow as proposed in FIP #2. Migration of affected assets opened on the website after the update, allowing existing users to migrate their WBTC, WETH, and USDT-based assets to their new variants. New users could use the platform directly.

In March, Neo SPCC published an RC1-compatible release of NeoGo including the state validation service and NeoFS support for oracles. The update added support for Go 1.16 and various documentation improvements, including a smart contract workshop. Neo-bench was also updated for N3 RC1 compatibility, allowing node performance to be tested.

Dora received considerable attention from COZ’s applications and special projects teams in March. N3 support was released alongside Neo Legacy, demonstrating the multi-chain features of the platform for the first time. The team also completed a revision of the node monitor tool and implemented a replica of the Neoscan endpoints to ease its end-of-life transition. Additional endpoints and websockets support have also been integrated to improve tool performance.

The NeoTube explorer has been updated with full N3 RC1 compatibility. A bug causing empty block information pages has also been fixed by the team.

The Boa team at COZ released N3 support in its Python compiler in March. Accompanying the various changes required for code compatibility are several new features, including the in operator, user-defined storage contexts, and type casting to help with storage deserialization.

A new automated market maker (AMM) contract example was also created by the team as a reference for Python developers looking to write contracts for N3.

March saw the release of RC1-compatibility in the Neon.js library. Enabling developers to interface with the blockchain using JavaScript, the SDK has remained one of the most widely used tools on Neo. With the new update, COZ brings this fundamental building block to N3.

In March, COZ focused on code alignment with RC1 as it approached a TestNet-compatible release for Mamba. Progress was made on wallet support, chain state, and overall performance. The team expects to release a new version in the near future.

AxLabs released a new N3 RC1-compatible version of neow3j in March. V3.8.0 brings the SDK, devpack, and compiler up to date with the latest core code, and includes improvements for the API used to access NeoVM stack items alongside other convenient changes. The team also overhauled all its documentation, tutorials, and examples with N3 RC1 compatibility, paving the way for Java development with the new Neo TestNet.

In March, the NEO Tracker team published NEO•ONE node-related packages which are compatible with Preview5. The implementation is able to provide all basic node functionality on Preview5 networks, including blockchain storage and RPC services. The team is now working on the RC1 version. The node update is almost completed, and significant progress has been made on the compiler and client packages.

Attention is also being given to developer resources; a recent update to the website corrected errors in the framework’s Neo2 docs and provided new guides for using NEO•ONE and its smart contract mixins.

The NGD Enterprise team released N3 RC1 support in the various tools for the Neo Blockchain Toolkit in March. New versions of Neo Express, the Smart Contract Debugger, and Visual DevTracker enabled developers to build with both N3 and Neo Legacy.

New step-by-step tutorials and video quick start guides were also released, which are available at ngdenterprise.com/neo-tutorials.

In March, COZ focused on aligning its desktop and mobile wallets for integration. A new deep linking feature and an interface in the desktop wallet will improve the onboarding experience for mobile wallet users. The team is also working on mnemonic imports for the mobile wallet, and expects to launch the open beta following new version releases in the near future.

Additionally, COZ has spent time exploring the governance workflows that will be used on N3, preparing for their implementation in the wallet.

NEXT updated its mobile wallet versions for Android and iOS, v2.8.0 and v2.6.4(54) respectively. These are now compatible with N3 RC1. The chrome extension wallet was also updated with RC1 support and fixes for the problem with the avatar display.

In March, the team integrated a number of services and projects into the wallet. Support for Wallet Connect and ParaSwap integration into the mobile wallet provides new functionality to users, and the team has entered a collaborative partnership with PolyNetwork to build its own exchange aggregation platform, O3 Swap.

For the side services, the team added the CDN cache invalidator into the CDN dev env, began removing SDK bindings from the HTTP gate, and finished work on object flows and payload types in the NeoFS loader.

Red4Sec continued its ongoing security audit of the N3 codebase through March. Particular attention was given to an audit for the recent RC1 implementation, which is nearing completion. The team also designed new fuzzing tests for critical N3 components, with executions showing notable improvements.