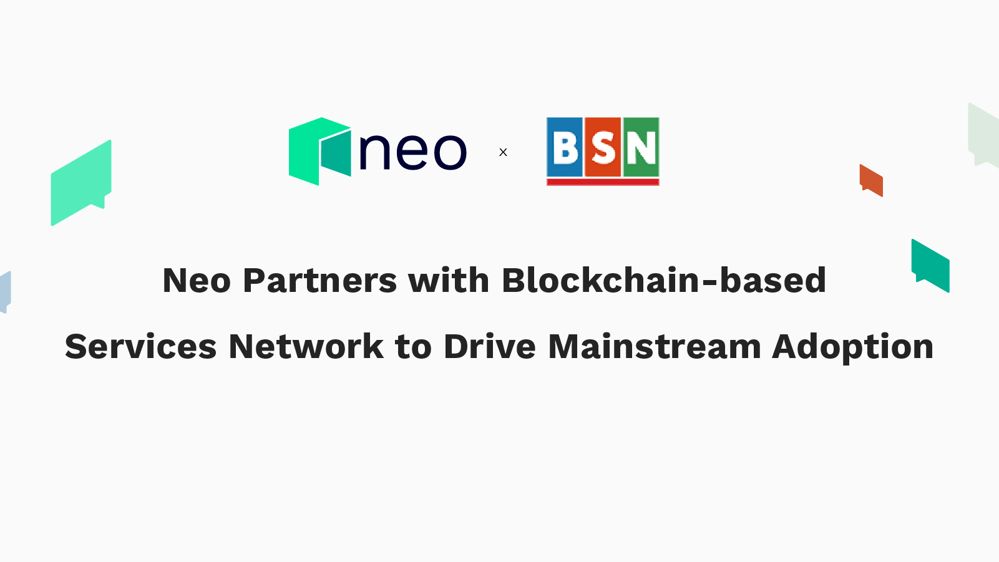 Today, Neo partnered with the Blockchain-based Services Network (BSN)—a global infrastructure aimed at building a digital economy by providing a low-cost platform for blockchain projects and companies alike. As one of the first public blockchains supported by the network, Neo will become one of the technological pillars of the BSN while working alongside other key players such as Chinese State Information Center, China UnionPay and China Mobile to accelerate and realize blockchain innovation and mass adoption.

High barriers to entry and fragmented developing experience are the key limiting factors preventing mass adoption of blockchain technology. The BSN aims to solve the current high cost problem of blockchain application development and deployment, providing a public blockchain resource environment for developers with greatly reduced costs of development, deployment, operation, maintenance, connectivity and supervision of blockchain applications, so as to accelerate the development and universal adoption of blockchain technology. United by their shared commitment to building the smart economy of tomorrow, Neo will be supported in BSN global public city nodes and portals to help developers overcoming hurdles and challenges preventing mass adoptions. Starting from 10th August, user will be able to experience Neo’s integrated services on BSN’s new official international website featuring:

Speaking on Neo’s partnership with BSN, Da Hongfei, Founder of Neo, noted that, “Blockchain adoption has accelerated dramatically within the past few years, and I’m excited to realize the smart economy of the future with the support from BSN. At our core, Neo is fundamentally committed to realizing a platform-neutral and fully digitized world to overcome the limitations of our current paradigm. As such, we look forward to overcoming the challenges facing mainstream blockchain while fostering cross-industry collaboration.  Hand-in-hand with our partners, I am confident that we will realize mass adoption of blockchain and build the smart economy of the future.”

As one of the five sponsor members initiated the InterWork Alliance (IWA) last month, Neo is committed to working alongside its partners to develop and promote tokenization standards for the smart economy. With the support from BSN, Neo is now set to usher in the next era of blockchain adoption and innovation. As the official launch of Neo3 approaches, Neo is ready to collaborate with developers, projects and enterprises to accelerate innovation while becoming one of the technological pillars of tomorrow.