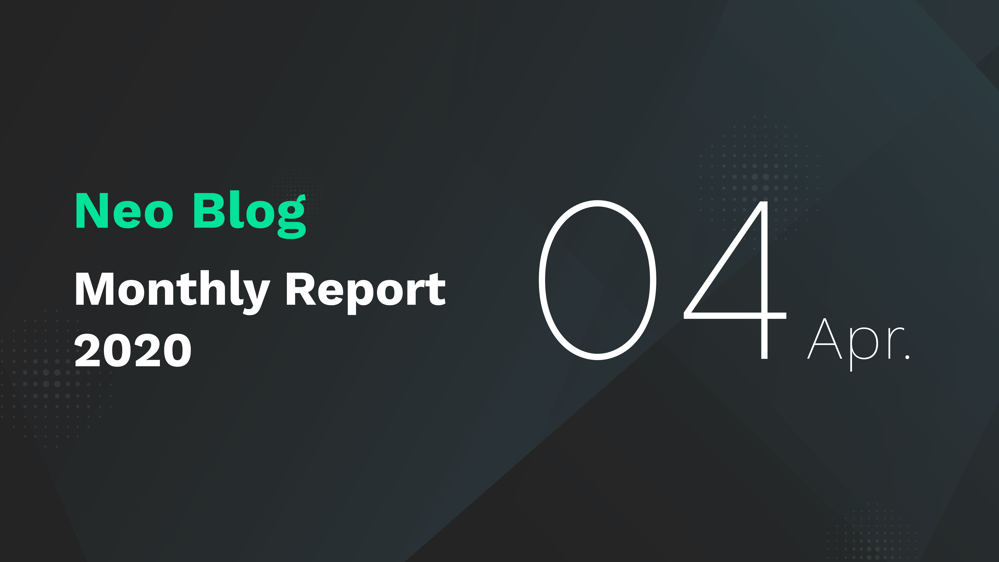 April delivered another concrete step on the road to Neo3 with the release of Preview2. The new version brings with it many enhancements, including upgrades to the NeoVM with an instruction performance increase of up to 16x.

The smart contract system also received upgrades, such as new contract IDs that remove the need for data migration during contract updates, permission controls at the manifest and contract levels, and new utilities such as JSON parsing and GAS balance requests.

The release of Neo3 Preview2 is hoped to accelerate the development of Neo3 tools and allow the community to begin the migration of existing tools.

As communities all over the world continue to adjust to life in a world with COVID-19, many traditional offline and networking events have moved towards online virtual events. This was the case for BlockDown 2020, at which Neo founder, Da Hongfei, delivered a presentation.

During his talk, entitled Blockchain in a Post-Pandemic World, Hongfei focused on how blockchain may solve potential long-term problems that result from the coronavirus pandemic. He also discussed new features in Neo3, and gave an update on the progress of Neo’s cross-chain interoperability protocol.

The full Neo global monthly report can be found below.

In April, Neo delivered major improvements in architecture, performance, and security to Neo3 with the Preview2 release. This milestone provides a comprehensive Neo3 development framework for Neo developer communities as well as for early Neo3 adopters.

In addition, work is underway to finalize the implementation of the new governance mechanism, and most of the built-in Oracle service development work has now been completed. Members of the Neo ecosystem are also helping determine a new economic model, aiming to provide more incentives to encourage increased participation in on-chain activities.

Since the release of Neo3 Preview2, community development groups that focus on providing vital tools and infrastructure for the network have been empowered to work on the next stage of Neo's evolution. During April, teams continued to move forward in updating existing tools to work with Neo3, with notable examples being COZ's popular neon-js and neo-python libraries and NEL's NeoRay contract debugger.

Through April, NGD Seattle worked closely with the Azure Blockchain team at Microsoft while building the Visual Token Designer, which it will unveil alongside the new time-travel debugger at Consensus Distributed 2020. The team also went to great lengths to improve the Neo Blockchain Toolkit, working on its Neo3 adaptation and on better facilitating Neo's polyglot community with support for the Go, Python, and TypeScript languages.

Neo St Petersburg also reported notable progress in April. The team has closely followed the core development of Neo3 and the core C# node implementation, porting changes and new features to NeoGo including native contracts, the new P2P format, and new VM opcodes. Neo SPCC's consistent progress on the Neo3 version of its Go node opens the potential for the Neo3 MainNet to launch as a multi-client network for improved resilience.

Full details on April’s infrastructure and tools development can be found below.

In April, the majority of Neo’s marketing activities were focused around the release of Neo3 Preview2. Marking yet another milestone, Neo took the opportunity to reach out to the entire community and communicate with them regarding features and improvements, so that both current and new developers could get up to speed with the infrastructure development.

Neo also made its first public speaking appearance of the year at the BlockDown 2020 virtual conference, where Da Hongfei shared his insights on what blockchain could do for the world following the coronavirus pandemic.

The Neo ecosystem continued to grow in various aspects. On the DeFi front, Switcheo and Liquefy made milestones in improving their DEX and STO services. Other entities looked towards improving the range of services available in the ecosystem, with NeoLine adding NFT browsing capabilities, and Archon and Incognito providing privacy and cloud services. Moreover, a new blockchain game is planning on integrating services from Higgs Network and NeoFS to deliver an optimal user experience.