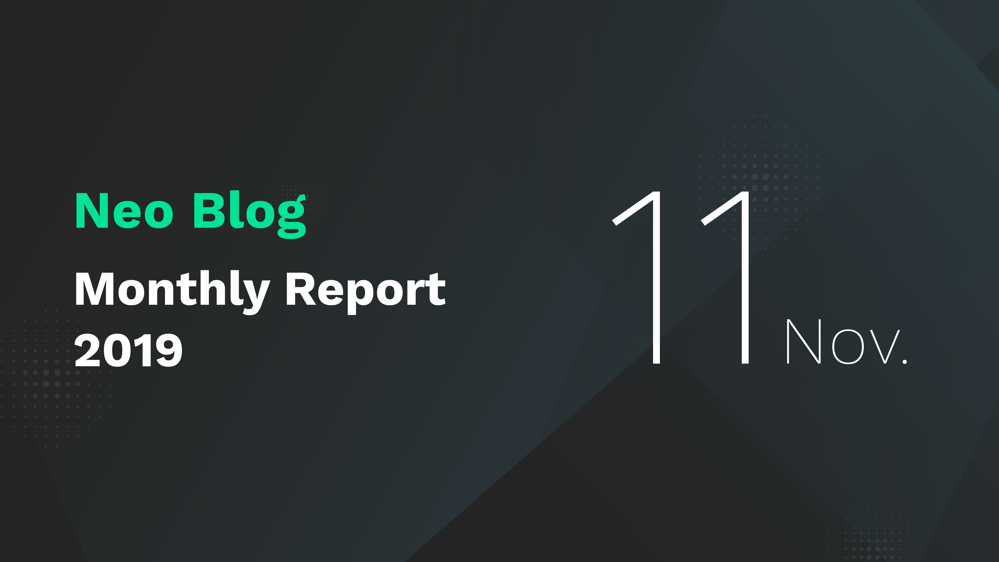 Through November, entities in the Neo ecosystem helped expand the global reach of the platform. Neo brought several ecosystem projects with it to BlockShow Asia 2019 for a dedicated Neo Eco Zone exhibit, and NGD announced that St. Petersburg State University would offer a Neo-based computer science course.

Other teams in the ecosystem contributed to the ongoing outreach, with NGD Seattle presenting at the Live! 360 conference in Orlando, Florida, and neow3j hosted a workshop and a lecture respectively at the University of Basel and University of Geneva in Switzerland.

On the development front, work has begun on the Oracle implementation, which will also include a new URL scheme to allow content stored on NeoFS to be accessed. Design work has also begun on a new and improved user interface for neo-gui.

The full Neo Global Monthly Report can be found below.

This month our core developers were actively involved in working on Oracles, the Neo GUI, and the Neo blockchain itself. Additionally, test cases were documented in November to help developers to test and fix PRs, and started replacing Travis with the new GitHub actions system.

Neo3 is still the focus at NGD Shanghai. The team continued discussion and design of the Neo's governance model, Oracles, and worked on optimizing network performance through various ways.

During November, community development groups covered major ground with new releases and feature exploration. The Russia-based NeoSPCC published several notable updates for the NeoFS TestNet and NeoGO client, including the implementation of support for dBFT consensus.

Contract development tools have also seen improvements in November, with NGD Seattle launching an updated version of its Neo Blockchain Toolkit for VS Code. A video introduction to the toolkit was released, presented by development lead Harry Pierson. Additionally, NEO-ONE added NEO Tracker instances for private development networks and continued its efforts in making its development tools compatible with Neo3.

More progress from around the ecosystem can be found below.

NeoSPCC has been focused on new releases of NeoFS and NeoGO. Work on NeoFS Testnet has continued, with the storage system receiving an upgrade and a new significant feature - reputation system. NeoGO has also been upgraded: it now supports dBFT consensus, and collects and visually displays important network metrics using Prometheus and Grafana.

The NEO•ONE CLI now starts a configurable Neo Tracker instance alongside the NEO•ONE node by default when deploying contracts to a private network in development with NEO•ONE.

The team focused on dBFT 3.0 - Designing the cancel phase and incentives as well as new insights for privacy for Neo smart contracts.

We have updated the basic functions for TK-SDK, completed Neo3 adaptation for basic features of Teemo wallet including inquiry, transfer, fee settings and dapp calls.

November was an extremely busy month for Neo in terms of marketing events. The highlight of the month was Neo’s presence at BlockShow Asia 2019 in Singapore, where attendees and the local community were able to experience Neo and Neo’s ecosystem from various aspects. Besides BlockShow Asia, Da Hongfei and other teammates also travelled to various parts of the world to meet international communities and introduce Neo and projects within Neo’s ecosystem to a wider crowd.