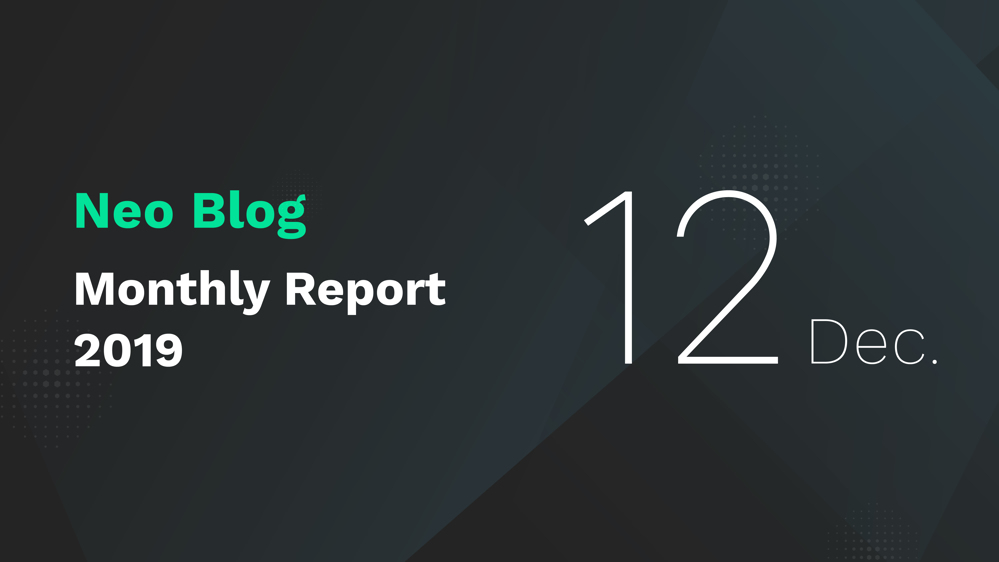 As 2019 came to a close, offline and online events slowed down as many in the Neo community prepared to celebrate the holidays. Even so, there were noteworthy achievements made in the month of December.

On the development side, the NeoVM received significant improvements, including redesigned and simplified opcodes, and enhancements that speed up execution efficiency by more than 16x. In other items on the road to Neo3, a proposal for a new governance model was completed, whilst consensus was reached on a voting proposal for the new built-in Oracles.

Community development groups continued to deliver with NeoSPCC releasing an updated version of neofs-local, a private development environment for building and testing applications that use NeoFS. Coupled with the recently published NeoFS Proto library, developers now have all the tools they need to test the API and create Go applications with native support for NeoFS storage.

Another noteworthy release came from Alienworks in the form of NeoNodes. NeoNodes is a network monitoring system that aims to provide developers with a picture of available RPC nodes in the Neo ecosystem, which can be used to remotely obtain data from the blockchain or to relay transactions.

In December, the core developers have redesigned the instruction set for NeoVM and introduced object reference counter and variable slot features. Storage disaggregation is being implemented on Neo, and restrictions on the invoked contract are also added.

We focused on storage refactoring on Neo to support the needs of different scenarios. Currently LevelDB and RocksDB are already supported and are adding support for FASTER. At the same time, we have strengthened the security of the contract and increased the permission limit of contract invocation. On NeoVM, we are redesigning the instruction set in order to enhance the functionality of contracts and reduce the excessive usage constraints of contracts. The variable slot and the object reference counter are added, for easy management of the object life cycle.

In December, NGD Shanghai continued to focus on accelerating the development of Neo3, and also improving the stability and performance of Neo3. Besides that, the Neo3 governance model and interoperability are also main areas that NGD Shanghai has been studying and discussing.

We focused on optimizing performance and we are considering adding StateRoot to Neo to ensure state consistency. In terms of performance optimization, we have tested in different environments and found that block generation is still not very stable and is still being optimized continuously.

Another interesting area of progress was Neo-GUI, in which we held many discussions around its front-end technology stack and product positioning. We took steps to investigate different paths, now it's under development.

In December, many developer communities focused on integrating Neo3 support into their projects. COZ finished preparing documentation for neo3-python, made network changes to neon-js to match the Neo3 network list, and began refactoring Neon Wallet. Similarly, neow3j made its Neo 3.x branch its default development branch, NeoResearch worked on adjusting NeoCompiler Eco to Neo3, and NEL made a range of updates to Teemo-NEO3.0.

In other Neo3 progress, NeoResearch also worked a new "Cancel Phase" for the future dBFT, which will be one of the core changes alongside a new governance system for consensus nodes.

Other notable progress includes Neo NEXT adding a range a new features to its NEOLine mobile wallet, including a news section, application search features, and fingerprint / FaceID integration, and the release of NeoNodes by Alienworks.

Full details of community development progress in December can be found below.

Approaching the end of the year, the NGD marketing team was busy with online activities such as Neo Live and holiday campaigns aiming to engage more projects in the ecosystem with the community. The Christmas campaign we ran on our official Twitter soon gained some popularity among the community. Looking back at 2019, we have been summarizing what we have achieved and what we could do better. Also, the team is busy preparing for some exciting activity lineups for early 2020, including details of the much anticipated Neo DevCon 2020. Stay tuned for another exciting year!