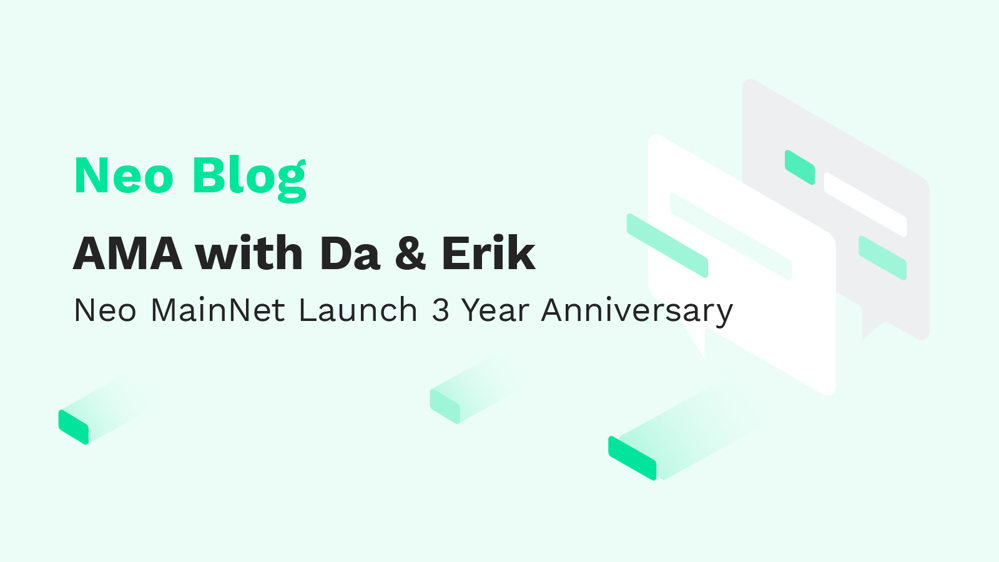 To celebrate the 3 year anniversary of the Neo MainNet launch, an AMA with Erik and Da Hongfei was hosted on Reddit to provide the community with more chances to ask questions, and share thoughts about Neo's future.

Below is the transcripted of selected questions from this AMA.

What is the ETA for Neo3?

Erik: The first preview of Neo3 has released last month. After that we will release multiple previews based on the progress of the development. The final official version is expected to be released in 2020.

With Neo3, will there be any changes to the total supply of NEO and GAS?

Erik: The current Neo3 plan does not include any change in total supply. But in the design of the new economic model, we do not rule out the possibility of changing the total supply. We will fully listen to the community before making any possible changes.

What does Neo plan to get more developers on board (esp. next steps regarding .NET developers)?

Hongfei: This is what NGD Seattle is working on, better tooling, documentation, industrial exposure, collaboration with tech giants

How do you see Nash within the Neo Smart economy ecosystem?

Hongfei: Liquidity is a crucial characteristic of any asset. Exchanges are the most important infrastructures for any token to have decent liquidity. Nash, together with other non-custodial exchanges, ie. Switcheo, have inherent advantages on aspects like safeness, transparency, permissionlessness over their centralized counterparties. Nash's novel architecture enables its user to exchange value not just within Neo blockchain but also across other blockchain. I predict we will see a boom of non-custodial exchange in the coming years when interoperability protocols are wildly adopted.

What the different between Neo and Ontology? In value proposition and use cases?

Both are the building blocks for next generation internet. NeoID is a digital identity module within Neo3 which works exclusively for Neo, while Ontology is a generic solution and has broader scope including data sharing. With interoperability protocols, they will form the NGI with other building blocks.

Are there more games and DeFi apps joining EcoBoost?

Hongfei: It’s more important for existing EcoBoost projects to launch their product and roll out iterations. There is a dozen of games/DeFi applications in the pipeline.

What specific progress has been made from a DeFi point of view in the Neo ecosystem?

Hongfei: John Wang, director of Eco Growth division at NGD had been working diligently with DeFi projects. Our first priority is stablecoin and non-custodial exchange.

Does the team have any plan to partner with the ID2020 initiative currently under development by Accenture, Microsoft, and Hyperledger? It seems self-evident that Neo would be highly complimentary to the UN's Sustainable Development Goal 16.9: "Provide legal identity for all (including birth registration) by 2030".

Hongfei: Recently, Neo joined DIF - decentralized identity foundation, of which the members include Accenture, Microsoft, Hyperledger etc. UN's Sustainable Development Goal 16.9: "Provide legal identity for all (including birth registration) by 2030" is a noble objective. But at this stage, Neo will be focusing on our purpose - the digital assest protocol for next generation internet. NeoID is designed to fulfill that objective first.

Can you provide a simple explanation for how you think digital assets combined with smart contracts can provide real-world economic value?

Does Neo have any future plans for ensuring data privacy in smart contracts? I believe a big barrier to enterprise adoption of smart contracts on a permissionless platform is that Smart Contract data can be viewed by anyone.

I've been reading news that China may want to create its own official cryptocurrency. Do you have any concern over that?

Erik: Neo is not a currency. It's a platform. I don't think Neo will have any conflict with the digital currency issued by the central bank of China or any other countries.

From another perspective, the new cross-chain technology being developed by Neo may make it easier for various digital currencies to circulate on Neo.

Decentralization of the core protocol is ultimately the end goal, but what major hurdles do you currently see as standing in the way of achieving that goal and how do we as a community help Neo to overcome those obstacles?

Hongfei: Decentralization is one of the means to deprive privileges associated with hierarchical structure when human collaborates. It's not the end goal but means as described in Antshares' vert first whitepaper. I believe full decentralization brings more disadvantages to Neo at this point, because it may very likely translate to slow development, endless debate over major updates, community polarization as we witnessed elsewhere. The current issue with dBFT is low voting rate, we are working on solutions to incentivize effective voting actions.

Neo still needs developers and useful dApps to attract more attention. You can have built the greatest tech in the world, but if you don't market it properly, you will never gain the right traction.

Hongfei: Number of active dApps does matter, but what's more important is what are they and how are they being used. Neo doesn't encourage gambling applications which counts the majority of the numbers on other blockchains. As the digital asset protocol, Neo has a high priority on enabling applications such as collateral-based stablecoin and non-custodial exchange. There are two working non-custodial exchange now but we lack of a well-received stablecoin comparable to DAI on Ethereum. The circulation of Alchemint/SDUSD is too small to be useful. Neo Foundation is looking for a team to work out and build a multi-asset collateral-based stablecoin project. Team up non-custodian exchanges with a commonly accepted stablecoin will lay a solid foundation for Neo to become the optimal infrastructure for the digital asset era.

Seeing that developing blockchain for business purposes (smart contracts, etc.) is still a work in progress for all companies like yourselves, can you envisage a year/decade when the wider business community will wish to adopt the technology? And when do you think you will be in a position to say to them that Neo is ready?

Hongfei: When people can use blockchain to digitize their off-chain assets, to use it as collateral to get a loan, has the ability to transfer money overseas at almost no cost, and to buy a coffee in no time, I'll say it's ready. The strategy is simple, strive to be the digital asset protocol for next generation internet.

Does Neo have the ability/intention to market itself by advertising? Is that something that can be done/financed by NGD or some entity? Curious why I never see tv ads etc. for blockchain projects, other than bitcoin billboards. I suppose a less specific question is what is the marketing strategy in place to promote the “brand” other than to attract developers to the platform and generally be the best, which I think Neo is and will be.

Hongfei: Blockchain is still a niche market. We should spend money more wisely than doing a super bowl commercial like pets.com did before the burst of dotcom bubble. I agree we need to do more promotion targeting broader audience. Ideas are welcomed.