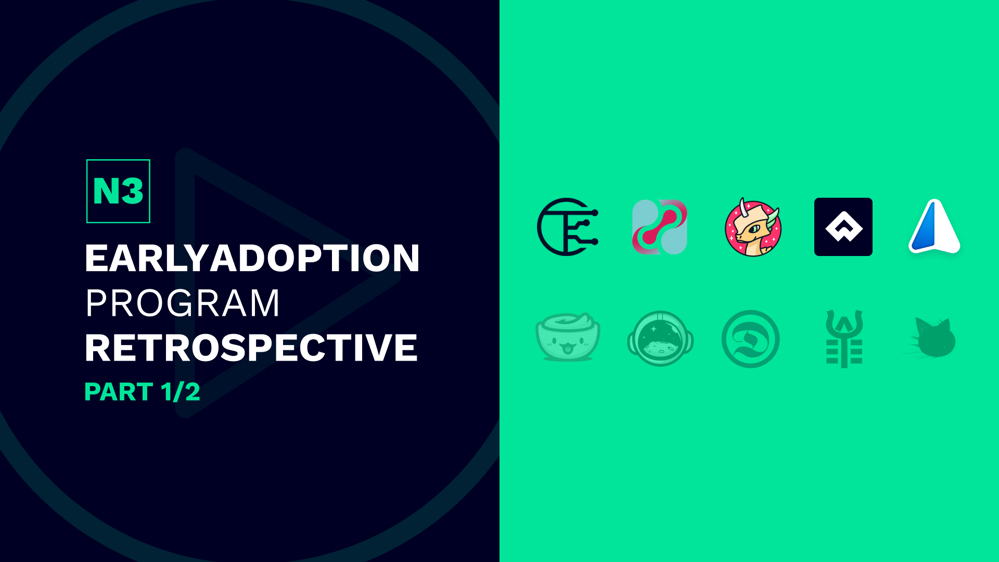 Neo Global Development (NGD) marked a successful wrap to the Neo N3 Early Adoption program at the end of 2021. This program has accepted and fostered 10 successful new projects within the Neo N3 ecosystem. In the first part of a two-part retrospective, this article reviews highlights from five of these projects: What they are, what they have accomplished, and what’s next.

About the N3 Early Adoption program

NGD rolled out the Neo N3 Early Adoption Program in 2021 in conjunction with the Neo N3 blockchain. The program allocated US $10 million in grants to jumpstart the success of high-potential projects on the new blockchain.

Projects accepted into the program received grants, technical support, and other incubation opportunities structured to promote the success of each project and establish a strong foundation to bring value to the projects and holders engaged with the Neo N3 ecosystem.

Project achievements and next steps: Part 1

GhostMarket launched in July 2020 with initial support for the Phantasma and Neo blockchains. Since then, artists, musicians, game developers, and general users have minted, traded, or sold NFTs on GhostMarket amounting to more than US $5.86 million https://ghostmarket.io/statistics/all/ in total volume. GhostMarket currently has more than 4.34 million NFTs on its platform.

GhostMarket was the first dApp to launch on the Neo N3 MainNet. To date, GhostMarket has deployed four smart contracts with Neo that allow users to mint and trade NFT in a fully decentralized way. GhostMarket has also established a standard regarding NFT royalties on Neo N3. Some other projects in the ecosystem have already begun to adopt the standard.

Vincent Geneste, CEO of GhostMarket, said that the N3 Early Adoption Program helped GhostMarket build a stronger community and provide access to an easy-to-use NFT marketplace. Geneste said the program was valuable for the Neo N3 ecosystem as well. “Neo’s Early Adoption program has been a great way to attract and onboard new projects,” he said. “This program has helped exponentially grow the Neo ecosystem by attracting more developers and dApps.”

The iMe Smart Platform application is a messaging platform for iOS and Android users. It is powered by the Telegram API and incorporates blockchain-enabled features such as wallets and DeFi. The iMe ecosystem spans a messenger, iMe Crypto Wallet, integrated DeFi tools, and a native utility token ($LIME) that includes several utilities (support for a decentralized autonomous organization (DAO) infrastructure for the iMe ecosystem and other functions). Users can also trade assets on the platform through the Uniswap DEX or Binance Pay.

The iMe app has more than 4.5M downloads on Google Play and App Store, more than 800K activated wallets, and about a million active users per day.

“It has been an honor for us to take part in Neo’s Early Adoption Program,” said Alex Borutskiy, co-founder and chief business development officer of iMe. “This global initiative is a wonderful opportunity. The strong helping hand of Neo enables developers to improve their products and reach mass adoption faster. The program has facilitated building a strong, international community that supports the growth of all participants’ projects.”

Borutskiy said that the iMe team continues to follow their outlined plans to bring crypto technology to the masses. The team expects to soon implement several enhancements:

The team also plans to continue to increase iMe’s DeFi (decentralized finance) functionality and introduce crypto features (such as donation capabilities in crypto and an in-chat CryptoBox automated giveaway facility) into the iMe messenger.

Polychain Monsters is a cross-blockchain, play-to-earn game based on NFTs. Play-to-earn games integrate blockchain-based solutions to create new monetization methods and revenue models for players and game developers. Polychain Monsters offers collectible, animated NFTs that users can find in digital booster packs purchased with $PMON tokens on Ethereum, Binance Smart Chain, and Polygon. Each booster pack includes three collectible NFTs known as Polymon monsters. The monsters in each pack have randomly selected sets of attributes that differ in rarity, resulting in some combinations of attributes that are especially scarce and desirable.

Sales of Polychain Monsters on the OpenSea NFT marketplace have surpassed US $14 million in trading volume. The Polychain Monsters collection continues to expand via special edition drops through partnerships such as ChainLink, Elrond, and Polygon.

Polychain Monsters was the first NFT product to support multiple networks, according to Lennart Brandt, CMO, and cofounder of Polychain Monsters. Neo is a founding member of the interoperability protocol alliance, PolyNetwork.  “When we learned about Neo’s commitment to cross-chain interoperability, we were immediately drawn to the N3 Early Adoption program,” said Brandt. “We believe both of our projects are committed to exploring and pushing the boundaries of today’s blockchain technology. Joining the N3 Early Adoption program has positioned us to double down on contributing to the smart economy of tomorrow.”

Brandt said that Polychain Monsters hopes to see the partnership spark a new wave of outstanding business innovations in the Neo NFT and gaming ecosystem. “By bringing our unique blend of DeFi, collect-to-earn, and play-to-earn to the Neo ecosystem, we will be able to build an even stronger, more diverse, and international community — the basis for improving our products and progressing on mainstream adoption.”

Looking further ahead over the next five years, Polychain Monsters plans to create a cross-digital collectible and gaming ecosystem with mainstream appeal.

Rentfuse is an NFT-renting protocol layer that enables Neo N3 NFT owners to rent out their assets: Owners can lend NFTs to generate revenue, and borrowers can rent NFTs to use them temporarily. A smart contract manages the NFT rent agreements between owners and tenants and provides a functional interface to other contra

cts that allow interaction with rented assets in exchange for GAS tokens.

The Rentfuse project is a success story from the 2021 Neo Frontier Launchpad hackathon, where Rentfuse won Best NFT Project. Since joining the N3 Early Adoption program, Rentfuse has reached thousands of people through Neo social channels and has developed Rentfuse’s core contracts on the N3 blockchain.

The Rentfuse team aims to enable the sharing economy on the Neo blockchain. To drive Rentfuse usage, the team is now focused on creating a frontend on TestNet to enable users to start testing the rental process that Rentfuse enables. They plan to put the TestNet website into production and implement final improvements, then move to a MainNet release.

“We thank everyone at Neo for believing in us,” said Michael Fabozzi, founder of Rentfuse. “It is an honor to participate in the Early Adoption Program. We look forward to seeing you all on the MainNet!”

TranslateMe is an instant translation service that joined the Neo ecosystem in 2018. The service uses a trustless protocol that leverages machine translation and blockchain technology. Through machine learning and human validation, content is said to be translated with 99.9% accuracy. Human validators can suggest improvements, review each other’s edits, and vote on the most accurate translations.

The translation company chose to join the Neo ecosystem because of Neo’s decentralized and strictly governed network and collaborative community support.

“Having such a well-known and trusted team assisting us with real use case implementation of blockchain on N3 is a big step forward for TranslateMe,” said Ryan Lloyd, founder of TranslateMe, “Without this partnership, we would be several months behind in our development. We are very grateful for Neo’s support.”

Fostering the Neo N3 ecosystem in 2022

The N3 Early Adoption program has concluded, but NGD’s dedication to drive growth and success for the Neo ecosystem continues. The Eco Support organization has shifted its focus for 2022 to fostering Neo ecosystem growth through the EcoBoost program. Watch for further updates throughout the year.