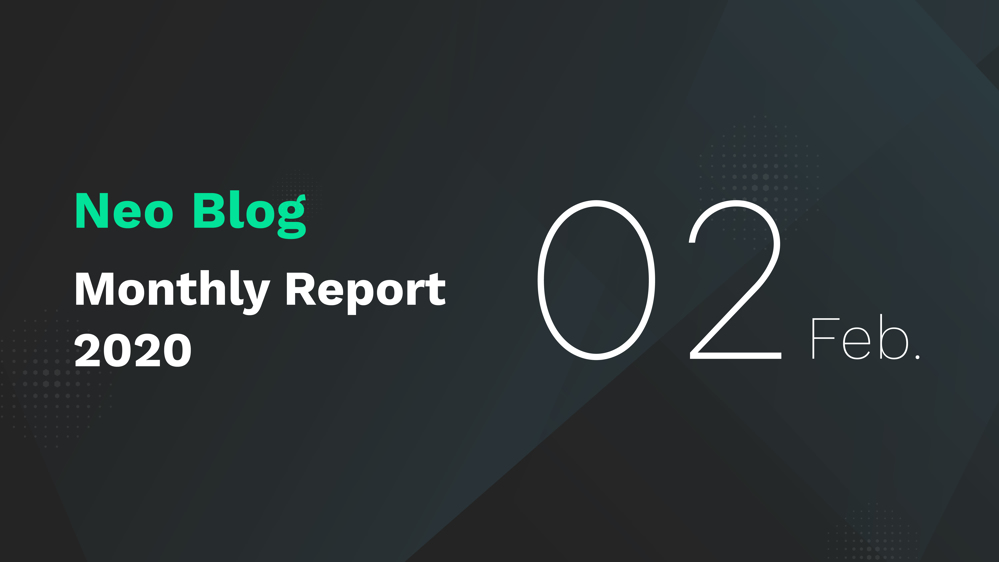 February saw the world begin to come to terms with the spread of the coronavirus, which has caused disruption to travel, events, and everyday workplace routines. Neo Global Development employees in Shanghai are safe and well, although encouraged to work from home wherever possible. We encourage all community members to stay vigilant and follow recommended guidelines for protecting themselves and their families against infection.

As of this month, we have broken the monthly report into four new categories: Protocol Development, Infrastructure and Tools Development, Marketing and Operations, and Ecosystem Growth. It is our hope that the new format will allow readers to more easily gain insights into the work completed by Neo’s global community and the growth of the Neo ecosystem.

The development of Neo3 continued in various aspects in February. Some highlights included detailed discussions concerning key aspects of Neo3 such as its governance and economic models.

Noteworthy efforts from development groups included the milestone release of Neo Toolkit for .NET v1.0 by NGD Seattle, which included major improvements to the Visual DevTracker component, and a new Mixed-Integer Linear Programming (MILP) model for generating dBFT proofs, designed by NeoResearch to help refine its final proposal for dBFT 3.0.

The NGD Shanghai marketing team launched a new version of Neo Live, building upon the Q&A Telegram concept and expanding into a webinar format for more detailed conversations. The first guest of the new format was Andrey Bugaevski, head of growth from IncognitoChain, who discussed privacy in the blockchain world.

Finally, the efforts of the Ecosystem Growth department bore many fruits in the way of partnerships with: Tor.us, a gateway to decentralized ecosystems via Google, Facebook and other OAuth logins; Blockgeeks, a blockchain education platform; Van Lang University in Vietnam; Suterusu, a privacy-preserving blockchain protocol; and more.

The full Neo Monthly Report can be read below.

In February, the Neo development community held in-depth discussions regarding the Neo3 governance model and focused on the development of built-in oracles and state root. Neo is hoping to complete these critical Neo3 components by the middle of Q2 to achieve a more efficient on-chain governance model, provide more accessibility to network resources, and ensure better block data consistency.

Good progress was also made regarding the Neo3 economic model which many are interested in. Neo is currently exploring adjustments for all kinds of network fees Neo3, which will be greatly beneficial to all users.)

During February, community development groups maintained the course set during the previous month. Efforts are ongoing to migrate existing tools from Neo2 to Neo3, ensuring that infrastructure is ready to meet the needs of developers building on Neo3. In addition to Neo3-focused developments, teams have also continued the improvement of resources for use on the existing network.

NGD Seattle released the milestone 1.0 version of its Neo Toolkit for .NET, which brought major improvements in particular to the Visual DevTracker component. In addition to facilitating block exploration across multiple Neo networks, the DevTracker UI now provides user-friendly alternatives to many of the toolkit's command line operations.

COZ completed integration of react-intl into the Neon wallet as part of its internationalization efforts, adding with it translations for Korean, French, German, and Vietnamese. Team members working on neo3-python also began discussions with NGD Seattle, considering potential neo-boa improvements required for its inclusion in the Neo Blockchain Toolkit for .NET.

Neo SPCC rolled out a reputation system for nodes on NeoFS, decoupled the service’s API from the neo-fs proto library, and completed the NeoFS core smart contract in Go. Updates were also pushed to NeoGO, solving issues with networking and dBFT that intend to ensure compatibility with the core C# node.

Full details of all community development progress in February can be found below.

February was rather a turbulent month for Neo and the entire world. Some of Neo’s planned offline events were affected due to the worldwide spread of the coronavirus. Although the NGD Shanghai marketing team had to spend the first half of the month working remotely from home, it still worked hard to deliver more ecosystem exposure and community engagement, especially via online spaces.

February was quite a fruitful month. The Neo ecosystem saw some significant progress in DeFi projects such as Liquefy, Nash and Switcheo. On the other hand, Neo has reached out to more potential blockchain developers around the world through partnerships with online and offline educational platforms. We have also welcomed Torus and Suterusu joining the Neo ecosystem as integral parts of the Next-gen Internet.