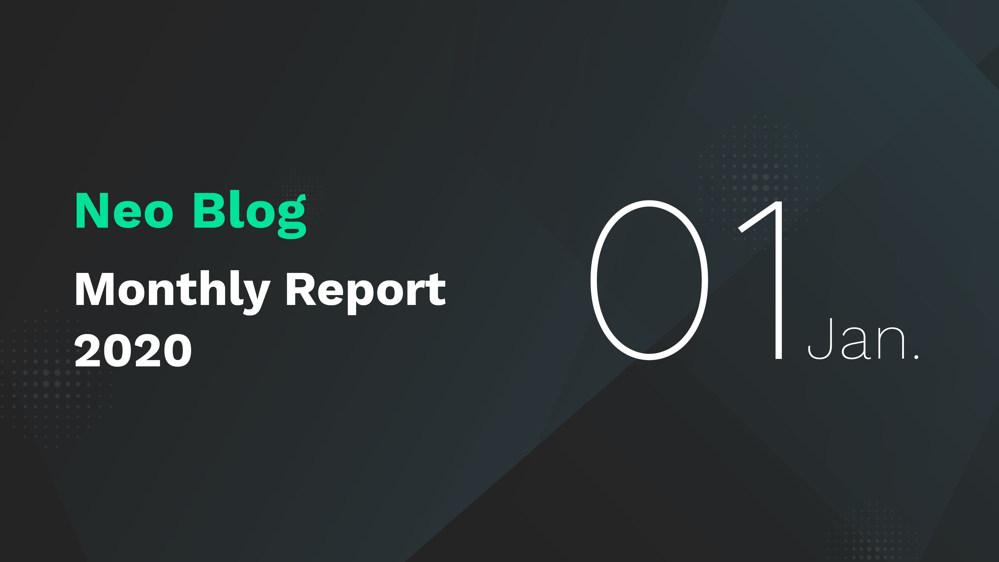 January was a short month for the Neo ecosystem, with development communities in the West returning from Christmas and New Year's holidays and communities in the East preparing for the Chinese New Year holidays. Nevertheless, a great deal was still achieved throughout the month.

Neo Core Developers and NGD teams focused on bringing libraries in line with the latest NeoVM changes and made progress on dBFT 3.0 as well as supporting these efforts through ongoing quality assurance and testing of critical PRs. The community development groups continued to work on infrastructure, both improving upon available Neo 2.x products and moving forward on Neo3 preparations.

The Coronavirus epidemic has caught the world by surprise but the government and the society is managing the situation with utmost efforts. NGD members are all back at work safe and sound, and all operations are running as usual. Although we have to delay some planned offline events such as the much anticipated Neo DevCon due to recent travel and visa restrictions, we are already working hard for a more exciting event which will showcase more progress on Neo3 and ecosystem projects.

In January we focused on bringing libraries such as neo and neo-devpack-dotnet in line with the latest NeoVM changes, and fixed some hidden vulnerabilities. These updates form a critical part of Neo3 Preview2, aiming to reduce many contract development constraints and better facilitate the needs of developers.

Another interesting area of progress was dBFT 3.0. NeoResearch has published a pre-release recently, which focuses on multiple redundant proposals to reduce the burden of a single Primary. More details are still being researched, including potential changes to the economic model and improvements to node distribution.

During the first month of 2020, the main focus of NGD Shanghai continues to be the acceleration of the development of Neo3 as well as continued quality assurance for all critical PRs in order to get all of Neo3’s components ready for the next big preview release. We also launched an in-depth investigation into Neo's infrastructure, looking for ways to upgrade and enhance the development experience of Neo3.

Other areas where we are making great progress are the Neo3 economic model and interoperability protocol. Following preliminary discussions around the Neo3 governance and economic model, a refined proposal has been created to facilitate its implementation. In terms of the interoperability protocol, we have been implementing MPT (Merkle Patricia Trie) in order to add StateRoot to Neo and also to develop the Neo cross-chain relayer and required contracts to support asset transformation between blockchains.

Much of the work completed by community development groups in January comprised of improvements to existing projects or further iterations on the path to Neo3.

Next resolved several bugs in its NeoLine mobile wallet and implemented UI optimizations, while the NeoLine browser plugin also received some attention. Next made various updates to its NeoTube explorer, providing additional statistics for GAS transactions, and making some infrastructure changes.

NEL made some adjustments to its own blockchain explorer, modifying styles and making other quality of life improvements. Further, a language selection option was added to the Teemo extension's wallet creation page.

Neo SPCC continued development on NeoFS and NeoGo and made over a dozen new version releases across its entire suite of projects. Notable NeoFS achievements included stability improvements regarding memory allocation and fault recovery, while a prototype of the reputation system was also implemented.

COZ released a new version of Neon Wallet that included split-key wallet imports that can be leveraged as an alternative to multi-sig wallets, and also to allow third parties to compute vanity public addresses. Extensive work was also dedicated to the continued design and development of Neo3-Python.

Full details of all community development progress in January can be found below.

January was rather a shorter month due to the New Year and Chinese New Year holidays. Besides celebrating the festive spirit with the community, the marketing team also hosted several important NeoLive guests who shared insights on the latest happenings within the Neo ecosystem.