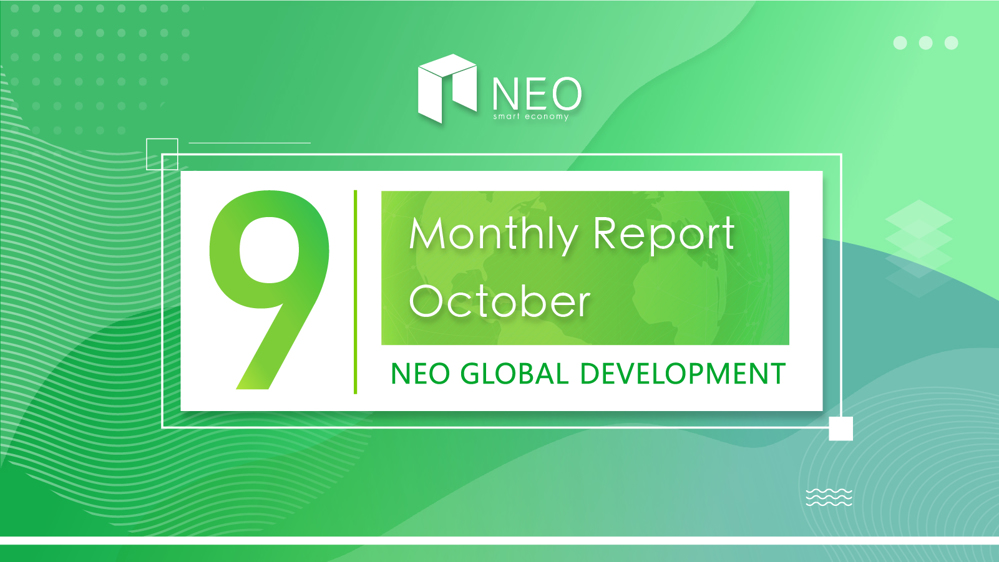 Last month, NEO Global Development (NGD) released its monthly report for August using a new template, which was based on community feedback. As this new version has received a positive response, our monthly report for September will use the same format. We appreciate the continued feedback and contributions from the community.

Please find our NGD monthly report for September, 2018 below:

This month we released NEO and NEO-CLI 2.9.0. The most remarkable feature of NEO 2.9.0 is that it is using the Akka framework. The Akka framework uses the Actor model to overcome the limitations of traditional object-oriented programming and will help solve the challenges of a highly concurrent distributed system.

It is also worth mentioning that in this version of NEO-CLI, many additional functions are packaged in the form of plugins, focused on enhancing the safety, stability and flexibility of NEO nodes. Users can choose the additional models without having to input cumbersome commands to start NEO-CLI. This will help avoid many manual mistakes, and the operations of either opening wallet or getting applicationlogs are simplified, which makes deploying nodes more convenient.

Another feature is that the applicationlogs are stored in the form of levelDB which has greatly decreased the number of applicationlogs and solved the “out of inodes” issue on Linux. You can find more details about these updates at the following link: https://medium.com/neo-smart-economy/latest-advances-on-neo-operational-perspectives-58d306ba2e41.

With the growth of the NEO ecosystem, an increasing number of decentralized applications (dApps) have been implemented on the NEO blockchain, requiring a diverse set of asset types. In response to requests made by the community, NGD has developed CNEO and CGAS, two contract assets that correspondingly map NEO and GAS, two global assets, to NEP-5 smart contract equivalents. CNEO and CGAS were created because NEO’s UTXO assets (NEO and GAS) cannot be easily used by smart contracts. By converting NEO and GAS to NEP-5 equivalent, developers can have access to full smart contract functionality and make use of the NEO and GAS tokens within applications. CNEO and CGAS can be correspondingly exchanged for NEO and GAS at a 1:1 ratio and are fully refundable. More details can be found at https://medium.com/neo-smart-economy/15-things-you-should-know-about-cneo-and-cgas-1029770d76e0.

The NEO Vulnerability Bounty Program (NEO VBP) was announced this month, in alignment with NGD’s commitment to the security of the NEO network. The program calls on security experts to help bolster NEO’s security, by offering incentives for teams and individuals who identify and submit eligible vulnerabilities. Rewards will be determined on the severity of the vulnerability submitted. Visit https://neo.org/dev/bounty for more information.

The NEO Creative Design Competition was officially launched in September. The event is organized by NGD and calls for the community to create website and icon designs that reflect NEO’s philosophy of “Smart Economy”. A prize pool of US$30,000 is up for grabs and submissions are open until October 14th. More details can be found at http://neo.org/design.html.

NGD (NEO Global Development) is an organization that was founded by the NEO Foundation (NF) in March of 2018. Its purpose is to focus on the execution of NF strategies surrounding technological research and development (R&D), marketing, community development, and ecosystem growth. We are in an exciting phase that NGD is growing very fast. In the past one month, we had a number of new talent join the team, and continue to remain on the lookout for outstanding individuals. Visit http://neo.org/team for more information.

NEO-CLI 2.9.0 with an enhanced developer experience was officially released this month.

In September, the community continued to grow steadily. We were pleased to receive lots of positive feedback and many helpful suggestions from the community through our #suggestions channel and dedicated mailbox.

The NEO Discord channels have been adjusted for easier navigation and more focused discussions.

We established the NEO Global Development Shanghai office in March of 2018. We are in an exciting phase that NGD is growing very fast. In the past one month, we had a number of talented individuals join the team and remain on the lookout for outstanding individuals in the future. NEO founders, Da Hongfei and Erik Zhang, provided progress updates regarding issues of community concerns through media interviews.

Mengyu has a Communication Engineering degree from Shanghai University and has been in charge of industrial software development and plant information system renovations for well-known domestic data communication corporations since 2016.

Nicole has an Information Engineering degree from Southeast University and previously worked as automation developer at Autodesk and software testing engineer at Canon.

Jessica has a master’s degree in Computer Software from Fudan University and previously served as testing manager at Wanda Finance Group and as senior quality engineer at DELL EMC.

Sue has a master’s degree in Surveying and Mapping from Wuhan University. Sue has been employed by well-known domestic data communication corporations as a product manager and software testing engineer since 2016.

Denis has a Finance degree from Shanghai University of Finance and Economics. He previously served as investment analyst in AA Ventures and his commentary addressing the financial industry in China was quoted by Forbes, CNBC and South China Morning Post.

Sarah has a MSc in Global Operations from Hong Kong University of Science and Technology. Sarah previously worked as the management trainee of Sinopec (HK) Petroleum and Financial Planning & Operations Manager for a key partner of Alibaba.

Qiao has a master’s degree in Computer Science and Technology from Tsinghua University. Qiao previously worked as software engineer & deputy IT Manager in a U.S. research institute and NCR CORP.

Chuan has a master’s degree in Formal Verification from Tsinghua University. Chuan was previously responsible for data platform construction and development for Freewheel and Guazi.com.

Longfei has a master’s degree in Applied Information Technologies from Towson University, USA. Since his graduation, Longfei has been working as a software developer for Premier, USAC and Wanxiang Blockchain Labs. He has been dedicated to research on blockchain technology and previously contributed to the creation of international blockchain standards (ISO/TC 307).

For three consecutive weekends between October 20th to November 4th, NGD will hold a hackathon tour across the Netherlands, Germany and Switzerland. 1,500 NEO and 4,050 GAS in prizes is up for grabs across the whole tour and developers are welcome to attend!