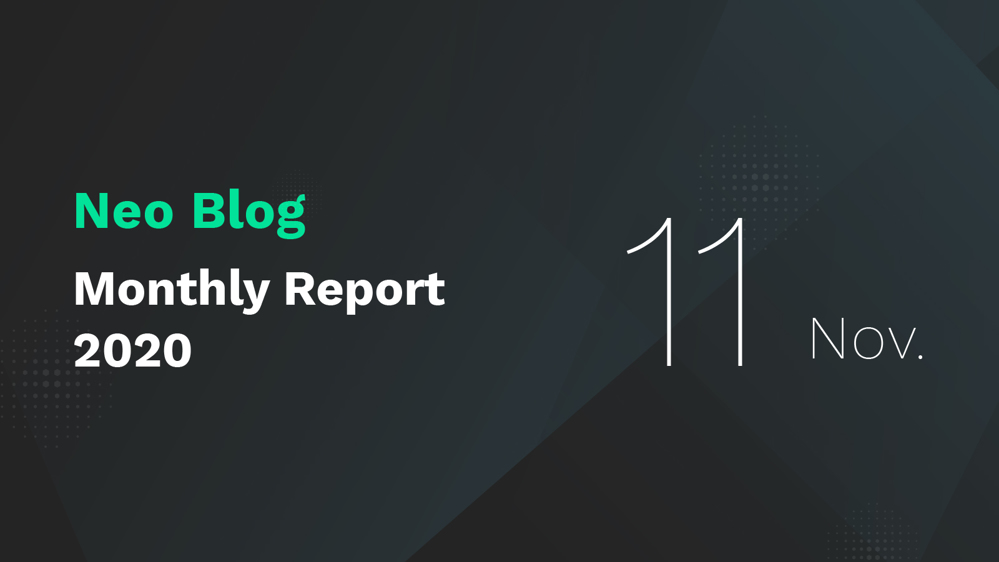 November saw the completion of some major Neo3 features, as the core development team inched ever forward towards Preview4 and progression to Neo3 TestNet. All governance and economics PRs were merged, following extensive testing in the month prior, which resulted in several fixes and optimizations. Significant progress was also made towards finalizing the Oracle implementation and changes associated with state-related logic.

Another noteworthy development was the introduction of NEP-17 - A new token standard for Neo3. NEP-17 inherits most of the same methods from NEP-5 with several new improvements, such as the onPayment method, which enables contracts to react to a transfer and automatically handle or reject it.

For regular users, explorers Dora and NeoTube underwent further preparations to provide an easy Neo3 browsing experience, and work continued readying the NeoLine and Neon wallets for the new network.

With the help of Neo's communities, developers and users alike can hope to have a first-class experience upon the launch of Neo3.

Neo3 Preview4 is currently planned to be the final preview release before TestNet. As we move into the final month of the year, both the Neo core development team and Neo's network of global communities are working daily to achieve this goal.

The full November Neo global monthly report can be found below.

Over the course of November, the Neo core development team concluded its work regarding the governance & economical model logic and applied a series of optimizations and fixes across various core repositories. Development of the state root and oracle services has also entered the final stage as Neo moves ever closer towards the official Neo3 Testnet launch.

Neo3 Preview4, the last build before the final Testnet, has been delayed slightly as the team looks to solve pending incompatibilities whilst leaving adequate time for testing before the release. More detailed information about the current progress on Preview4 can be found here.

All PRs related to governance and economics were merged in November, marking the completion of these components for Neo3. The changes included a number of fixes and optimizations, particularly in terms of GAS reward distribution.

These rewards have been rebalanced in order to better cover operational expenses for committee members.

The proposal to use the Merkle Patricia trie to only store the latest state (#1996) has now been thoroughly tested, intended to improve TPS and reduce node storage requirements. Following core team discussions, this change and other state related logic was detached from the core and migrated to neo-modules (#408, #410, #414).

The Oracle service implementation for Neo3 is nearing completion. Over the past month, the development team focused on a PR that will move the service to neo-modules (#326), applying several bug fixes and other enhancements in the process.

November also saw the introduction of a new token standard, NEP-17 (#2024). NEP-17 provides a new onPayment method to replace the payable check in a deployed contract. If the recipient of a token transfer is a deployed contract, it will call the onPayment method, allowing it to react to the transfer and automatically handle or reject it accordingly. The new standard inherits most of the same methods from NEP-5, which it replaces, except the name method, which has been removed and is now included in the contract manifest for all contracts.

Other noteworthy changes include an increase in the MaxValidUntilBlockIncrement to 5760 (#2042), which is approximately 24 hours, and the move of MaxTraceableBlocks to the protocol configuration with a default value 2102400, or approximately 365 days. Additionally, UInt160, UInt256, and ECPoint were added to the SmartContract Framework (#362), alongside two interop services, System.Binary.Itoa & System.Binary.Atoi (#2043), which serve to convert BigInteger types to String and the inverse.

The client can now also add services via the plugin system (#2068), for example, ConsoleService could be added to the system in order to allow plugins to access the console. Finally, several integer cast types have been implemented, such as short, ushort, byte, and sbyte (#380).

Launched the Flamincome DAO and token, and added the new SWTH/nNEO trading pair to the Flamingo Swap module.

Improved on the NEO•ONE v3.0 release with bug fixes to node storage and RPC services, ensuring consistency with the core implementation.

Added exception, try-catch-finally, and event support to its compiler, and implemented a reference implementation of a NEP-11 compliant NFT contract.

Shifted focus from its ongoing Neo3 codebase audit to a security assessment for the upcoming Preview4 release.

On the Flamingo side, the Swap module was updated to introduce the new SWTH/nNEO trading pair and FLM rewards for its liquidity provision. Finally, the team also announced the upcoming Perp Trading Competition to accompany its beta launch.

Through November, COZ made significant development progress on the integration of Neo3 into Dora. Changes were accompanied by a backend overhaul designed to meet the service’s performance and scaling needs, and work is underway on a Neoscan API alignment, in preparation for its end of life.

November saw the release of a new NeoTube version by NEXT, specifically developed for the Neo3 blockchain. The new version (https://neo3.neotube.io/) includes a dedicated token page and detailed transaction breakdowns including signers, witness information, notifications, and other standard information.

COZ continued to work on its Python compiler through November, introducing a number of new features required by new example contracts currently under development. These include an atomic swap contract example and a template for the new NEP-17 token standard.

November saw the release of Neow3j v3.5.0, bringing a range of improvements to AxLabs' compiler for Java contracts. Support for exception throwing and try-catch-finally blocks has been completed, in addition to supporting for smart contract events. The team is now attempting to provide a reference implementation for a NEP-11 compliant non-fungible token contract, written in Java.

Neow3j v3.5.0 also brought small fixes and improvements to the SDK. A check for invalid decimals in token transfers was added, and the return types of the Any and InteropInterface stack items have been corrected. AxLabs is closely following the development of Neo3 Preview4 and continuing to adapt its tools accordingly.

The Neon.js library underwent miscellaneous refactoring, intended to replace the previous "quick implementation" of various components with a more permanent and maintainable format.

In November, work on the interop layer was completed for the Mamba SDK, which has been tested with the Preview3 build. A new version will be released in the near future, prior to the Preview4 release, which itself will be followed with another patch in order to correct any breaking changes.

Building on from the NEO•ONE v3.0 release, which was unveiled at the end of October, November saw the Neo Tracker team rolling out several bug fixes to the release. Updates to token transfer and balance storages and various RPC methods ensure that calls now return the expected information and data types. Application log data has also been added to the node, giving access to more detailed contact information, and the team is now working on the client APIs to handle end-user interaction with it.

The team reports significant progress towards the v3.0.1 milestone, which will include both the client and CLI updates for Neo3 and allow users to run local private networks. This release will primarily focus on bug fixing, aiming to achieve consistency with the official C# node implementation.

In November, NGD Enterprise continued to iterate on components included in its blockchain toolkit for VS Code. The Neo Smart Contract Debugger was updated with enhancements to support the preview release, and the Neo Express module received private network Oracle support. The Visual DevTracker also saw new improvements focused on developer experience, improving invoke/view flows and other changes to support the next Neo3 preview release.

November saw the release of a new Neon wallet version, v2.6, including major dependency updates, automatic over-the-air update support, and a redesign for both light and dark themes. The release was followed by patch v2.6.1, which expands the block explorer options, adds new nodes to the RPC list, and corrects a bug that prevented multiple Switcheo tokens from being sent.

NEXT continued to progress on the Neo3 versions of the NeoLine wallet. For the mobile wallet, optimizations to the Neo3 TestNet module and the addition of an address book and message center are hoped to improve the user experience following the Neo3 Testnet launch. The Chrome plugin was also updated with complete multi-chain support and interface adjustments to accommodate them. Finally, NeoLine’s backend service was updated to improve asset exchange rates, the notification system, and to solve various bugs.

NeoFS core saw a number of improvements in November. Neo SPCC implemented a new Blob storage engine for better efficiency for large and small objects and added a new Metabase with index support for fast operations such as SEARCH and HEAD.

SSD write cache support has now also been implemented, in addition to a new Netmap query language parser. The network’s governance scheme received updates in accordance with Neo discussions, and a number of new NeoFS CLI features have been rolled out.

External services also received updates, particularly those that involve the CDN components. Test coverage has been completed for the CDN SDK toolkit, and integration testing has been set up. The HTTP and S3 gates have now been completely integrated into CDN; components are currently being deployed for real world environment testing.

Throughout November, the marketing team focused on ramping up preparations leading to the launch of Neo3 Preview4 and the TestNet. Personally, I am very excited about the upcoming launch of Neo3 Preview 4, which marks the addition of several key features:  built-in Oracle, governance mechanism, and token economics, as well as an improved NEP-17 standard as an NEP-5 upgrade.

I believe these new features are indispensable elements of Neo3’s ambition to build a “straight out-of-box” full-stack blockchain experience. We are working on a major revamp of the official website to highlight major changes in Neo3 to the community. The team is also planning for several online activities to provide the community chances to communicate face to face with our Neo3 developers.

On the other hand, the Flamingo team decided to postpone the launch of Perp to mid-December to take time to conduct extensive testing and optimization. We want to take a more cautious approach towards launching the product, and the team will be hosting a trading competition along with the beta launch.

With holiday seasons around the corner, Neo’s ecosystem projects are still working hard to put a perfect ending to the year.

After securing a US $1.2 million second-round funding led by DeFinance Capital, Switcheo launched the Switcheo Development Fund. The initiative is designed to encourage ecosystem developers to build new decentralized technologies and was passed as a TradeHub Improvement Proposal by the community. Moreover, the SWTH/nNEO pair was listed on Flamingo Swap, and we are happy to see the entire ecosystem growing in synergy to create more value and use cases for the Neo blockchain. We look forward to more collaboration between Neo and Switcheo in expanding our developer ecosystem.

On the NFT front, GhostMarket is about to roll out a very innovative platform - mint shops. These mint shops will allow artists, musicians and game creators to create their own NFTs. As an advancement to current NFT technologies, the mint shops will enable creators to build nested NFTs by embedding other digital assets.