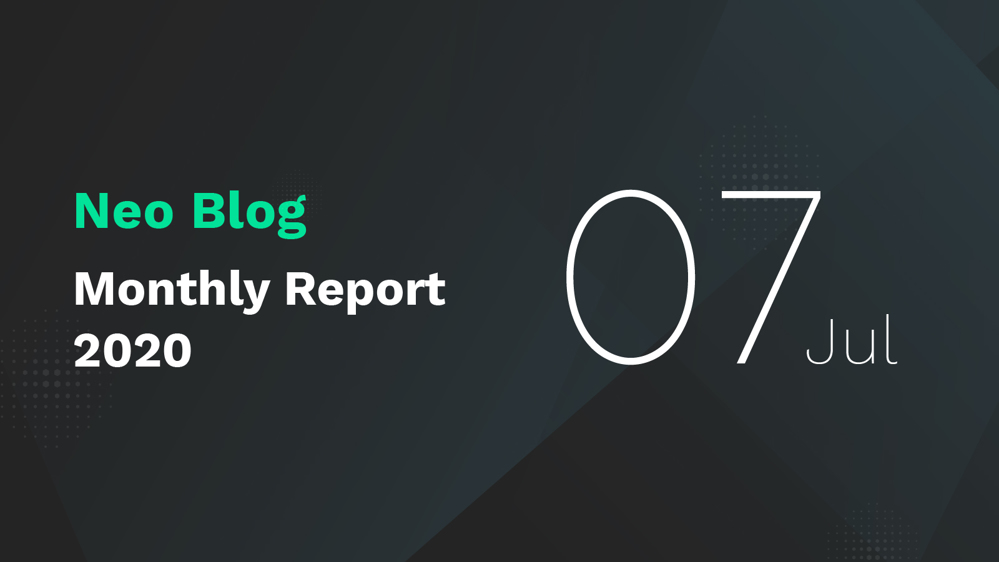 Neo followed the announcement of its involvement with the InterWork Alliance in June with a partnership with the Blockchain-based Service Network (BSN) in July. The BSN is part of China’s national initiative designed to boost the integration and adoption of blockchain in enterprise, small business, and local government. Neo is among the first batch of public blockchain platforms to partner with BSN and aims to become one of the technological pillars of the service network.

The BSN will feature on demand Neo node deployment for both MainNet and TestNet, promising a “high-performance and high-availability Neo node service environment.” It will also provide front-end systems with access to nodes and Neo SDKs for a convenient developer experience.

As some parts of the world seek to return to life in a new normal, Neo has been able to restart some of its marketing efforts. Da Hongfei attended his first in-person conference of the year, delivering a keynote speech at the 2nd Chain Plus Blockchain New Finance Summit 2020 in Shanghai. Neo also participated in a range of virtual events, such as Unitize 2020 and Binance’s Off the Charts third anniversary event.

From a development perspective, work continued on Neo3 and the Preview3 milestone. Key areas of development included the built-in oracle service and preparations for Neo’s cross-chain capabilities. The focus of community development groups remained heavily on infrastructure with teams such as Neo SPCC, COZ, and NEL all making significant progress in the area of Neo3 support.

The full Neo Global Monthly Report for July can be found below:

These new features are expected to be merged into the master version in the coming month, alongside the implementation of Neo3's economic model.

Neo SPCC pushed a number of public releases related to NeoFS, including DevEnv, a replacement for neofs-local, along with WIP releases of the storage/inner-ring node and NeoFS tech spec. The team also updated the neo-go workshop and benchmark tool to be compatible with Neo3, including several post-Preview2 changes such as exception handling in the VM.

COZ noted that its universal VM implementation is now compatible with the Preview3 release, and has begun work to bring its Javascript and Python SDKs forward to work with Neo3. Work is also underway to revamp the Neoscan explorer, currently undergoing internal testing.

Likewise, other development groups have also prioritized adapting resources to work with the latest Neo3 version. Neow3j released a Preview2-compatible Java devpack and compiler, with analysis on changes required for Preview3 underway, and NEL has continued to improve Neo3 support in its NeoRay contract development suite.

Tutorial presented at the Summer School entitled "Deep Dive into Blockchain–Linking Economics, Technology and Law" at University of Zurich, Switzerland. In the final assignment, 1/3 of the student groups picked the Neo blockchain to develop dApps.

July was an exciting month for the NGD Marketing team. After the launch of the InterWork Alliance alongside Microsoft, Accenture, Digital Asset, and SDX to advance the global standards for digital assets in June, Neo joined the Blockchain-based Service Network (BSN) as one of its first public blockchain partners, to further accelerate blockchain innovation by greatly reducing the cost of deploying blockchain applications while speeding up large-scale blockchain applications. Both mainstream and blockchain media all over the world have responded with strong interest towards these developments.

Since the resumption of operations from the COVID-19 impact, the marketing team has been gradually ramping up Neo's online and offline presence by attending and organizing events to share latest development and industry insights by enhancing community communication. In July, Da Hongfei and John deVadoss delivered keynote speeches at prominent online and offline conferences globally to offer insights into the overall blockchain industry, technical trends, and the development of DeFi. Moreover, the marketing team also restarted online activities to promote leading community projects. Two of them - Switcheo and Neoline - have driven community buzz by further synchronizing with community needs while working with the marketing team to amplify their voice through online campaigns.

August will be another month to look out for. We will be releasing Neo3 Preview3 with abundant enhancements and optimizations, as well as the implementation of Neo3's governance committee mechanism. On the other hand, we are also laying out Neo's plan for DeFi by setting up some main components such as digital assets, trading, and stable coins. Stay tuned to keep updated on these developments and more in August!

In July, the Neo ecosystem made new progress in the NFT space, with Ghostmarket supporting the display and trading of NFTs from both Neo and Phantasma, while integrating Neo wallets such as O3 and NeoLine. We also welcomed two new ecosystem partners: decentralized storage infrastructure platform, ThreeFold, and staking wallet, Moonstake.

As trading volume is picking up quickly on DEXs, Switcheo is set to launch TradeHub on the 12th of August, enabling SWTH staking. Switcheo has also launched its Chinese community operations in July, headed by its WeChat official account “Switcheo Fans.”

On the other hand, Neo has been constantly reaching out to global educational institutions for greater ecosystem building. Last month, Neo completed the Summer School program “Deep Dive into Blockchain” at the University of Zurich in July, which attracted around 100 students to brainstorm and develop applications using Neo’s technology.