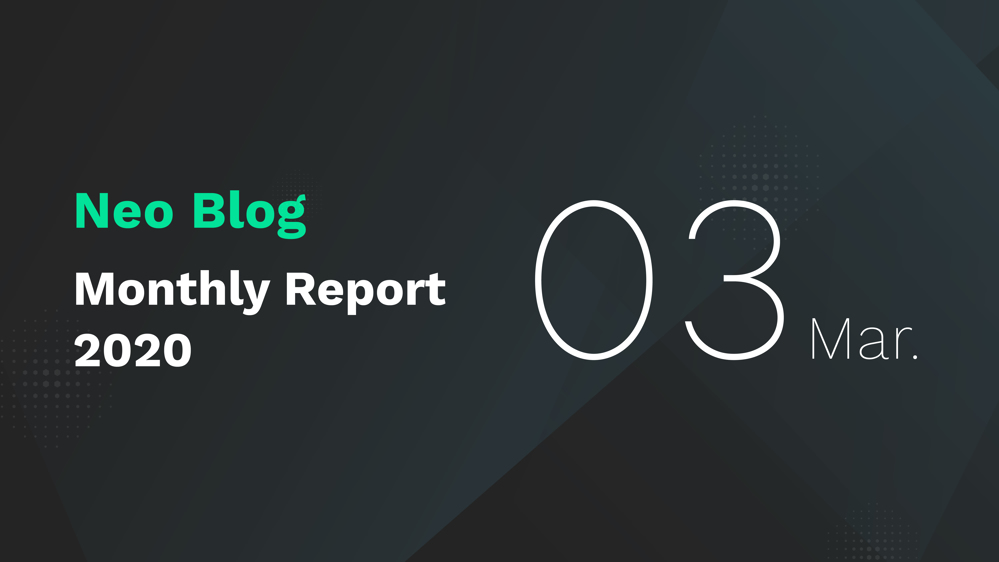 It is no secret that the world is facing significant challenges in the face of the COVID-19 pandemic. Neo is a global community with contributors from all over Europe, Asia, North America, South America, and Australia, and everyone's way of life has been touched in some way by our shared adversity.

Neo is lucky in that our work is distributed and remote by nature, and so we are able to continue our mission during this crisis in ways that others are not. However, we are cognizant of the fact that in times of hardship, above all else, taking care of ourselves and our loved ones is the number one priority. We encourage the community to stay safe and follow directions issued by your local governmental authorities so that together we may defeat COVID-19 and return to a sense of normalcy.

Neo3 continued to progress in March with much discussion around its governance mechanism and the ongoing development of oracles and state root features. As a result, Neo3 Preview2 is expected to be deployed soon, which will include new features such as improved Neo CLI commands and performance, updated Akka for better P2P, a refactored plugin engine, and more.

The Neo Foundation completed its financial review for 2019 and expects to release the 2019 Fiscal Year Financial Report in April. The report will detail expenditures and financial positioning of the Neo Foundation up until December 31st, 2019.

March also saw milestone releases from projects within the ecosystem. Incognito completed a privacy bridge between the Incognito Wallet/DEX and the Neo blockchain, offering users in the Neo ecosystem access to anonymous transactions. The NeoLogin team developed the SmartBNB protocol, a cross-chain solution intended to allow tokens on Binance Chain to use Neo smart contracts. And, Moonlight launched its MVP dubbed “Copernicus,” allowing for the creation and sharing of professional profiles, basic analytics tools, examples for attribute verification, and automated self-sovereign identity creation.

The full monthly report can be read below.

During March, Neo core development focused on preparation of the Preview2 release, which is intended to enable developers to begin work on tools and applications that will integrate with Neo3. New features such as the GasLeft syscall are designed to help make Neo3 contracts more flexible, and a C# NEP-5 template for Neo3 will be available in the devpack for testing.

Additionally, priority has been placed on finalizing the Neo3 governance mechanism, which is hoped to be completed by the middle of Q2. As discussions are ongoing, details will be revealed once the initial implementation is finalized. Further, Neo continued to work on the development of the built-in oracle and state root features. During the implementation, new ideas were discovered that could potentially improve these solutions; these directions are currently being researched.

Through March, NGD and Neo's development communities continued to balance their efforts between maintaining existing infrastructure and working on Neo3 integrations. NGD Seattle noted that its toolkit architecture has been made ready for Neo3 integration, which it intends to support alongside Neo2. The toolkit has also been updated with support for Python smart contract development and debugging.

With its version 2.4.0 release, neow3j provided an added layer of convenience for Java developers that wish to interact with NEP-5 contracts on the Neo2 network. Work is also underway to integrate the library with Neo3, with several OpCode related updates and automatic network fee calculation now implemented.

Updates and fixes for Neo 2.x

In March, the NGD Shanghai marketing team worked on many online campaigns, with Neo Column and Neo Live as main focus areas. Several authors have already begun providing content to the Neo column by publishing articles on a wide range of topics, from macro discussions on DeFi trends to the technical aspects of blockchain development.

Efforts have also continued in fine tuning the format and promotion strategy of the Neo Live Webinar to encourage more community engagement. In addition, the marketing team is also busy preparing to deliver an immersive Neo experience at upcoming blockchain events in the first half of the year as many of them are going virtual.

Another project under development is a Neo3 knowledge contest mini-program on WeChat, aiming to raise awareness of Neo3 within the Chinese community.