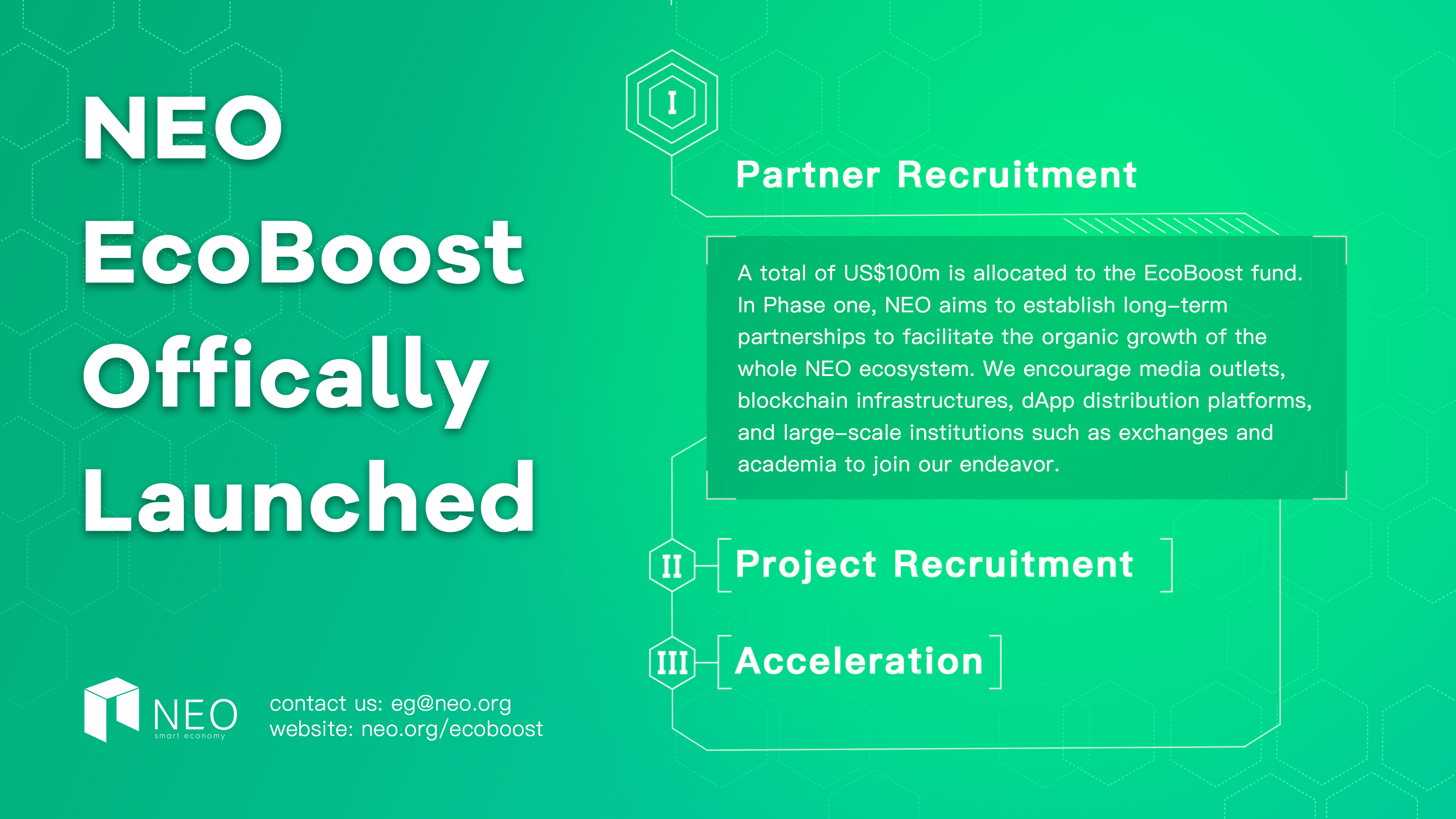 Recently, the cryptocurrency market is showing signs of gradual recovery. Public blockchains that have survived the ride are running in a more prudent and rational manner. Fundamentally, and in particular, ecosystem strength is becoming one of the most important factors in determining a public blockchain’s position in a very dynamic and competitive landscape.

On May 14th at the Consensus 2019 event, NEO Founder and CEO of NEO Global Development (NGD) Da Hongfei, announced the USD$100M EcoBoost program designed to support the growth of the NEO ecosystem. Recently, NGD officially launched phase one of its EcoBoost program to recruit “EcoBoost Partners.” Numerous applications have been received from leading institutions and projects in the industry.

2019 is a year of consolidation and growth for the whole industry. Public chains capable of building up a robust ecosystem will have an edge over others in the market, and NEO is undoubtedly right on track. Since NEO3 was announced at the end of 2018, a roadmap documenting its development has been released and  a new White Paper is on the way.

NEO3 aims to realize the vision of Smart Economy by supporting large-scale commercial applications. The commercialization of blockchain technology is a upward spiral, of which infrastructure development and ecosystem exploration are integral parts. We believe that the EcoBoost program along with technological progress will be cornerstones to developing the NEO community.

The NEO EcoBoost program was created to support developers and project participants in the NEO ecosystem. We invite more projects and partners to join our ecosystem to benefit from NEO’s sturdy technical foundation, strong community presence, and years of experience in community operations. The NEO EcoBoost program will provide growth support to projects from 0-1/1-N of their project development stage. By matching the most suitable partners, we will achieve benignant, efficient, and enriched community operations.

In phase one, NGD aims to establish long-term partnerships with media outlets, wallet providers, dApp distribution platforms, and large-scale institutions such as exchanges or Universities etc. These partners are intended to provide a network of support to projects in the NEO ecosystem at different phases of their life cycle, from seed phase, to growth, and maturity phases.

For more details on our partners, visit https://neo.org/ecoboost

Following the recruitment of high-quality EcoBoost partners in phase one, NGD will publicly invite teams that are building projects such as dApps and developer tools, or providing public infrastructures for the NEO network to apply for the program. The scope of support provided will be based on the stage and needs of the project at any given point. Once the allocated budget has been reached, the recruitment will end.

Building on the existing community structure, the goal of EcoBoost is to further enrich the community, incentivize developers with existing products, and encourage projects to seed even better projects. NEO will provide support for developers to grow their projects from 0 to 1.

In this phase, the needs of NEO ecosystem projects will be matched with corresponding resources provided by eco-partners to accelerate development. Projects will directly connect with NEO EcoBoost partners such as media outlets, dApps, and exchanges, for cost-effective service plans. NEO will also assist quality projects with free promotion.

With the EcoBoost program as the cornerstone of our efforts, NEO will continue to invest in the ecosystem with full determination and confidence.